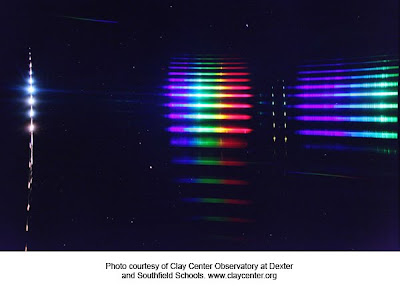 On June 13 of this year, the Japanese spacecraft Hayabusa reentered the Earth’s atmosphere in a brilliant fireball of light, after a seven-year journey collecting samples from the asteroid Itokawa.

One lucky Fordham University junior was there to see it.

Erin Leidy, a physics major at the Rose Hill campus, was part of a team of international scientists aboard NASA’s DC-8 Airborne Observatory, a plane equipped specifically to observe and record reentry data. The team, which included scientists from the U.S., Germany, Japan, and the Netherlands, traveled to the Australian outback to witness the high-speed homecoming as the spaceship fell to the earth at a speed of 12.2 kilometers per second, or over 25,000 miles per hour.

As the only intern on board, participating through the National Science Foundation’s Research Experiences for Undergraduates (REU) program, Leidy not only witnessed the spectacle, but collaborated with NASA scientist Dr. Petrus Jenniskens on analyzing the ships’ re-entry spectra, or light waves, for the SETI Institute (Search for Extraterrestrial Intelligence.)

NASA’s flying laboratory has been used to study re-entry during the returns of the 2004 Genesis, the 2006 Stardust, and the 2008 ATV-1 missions. It is equipped with optical windows and an instrument known as ASTRO, a special spectrograph camera that can record high ranges of visible light spectra. That data is then analyzed to measure (through color and wavelength analysis) chemical elements present when the capsule streaks into the earth’s atmosphere, and ultimately to measure the effectiveness of the capsule’s heat shield and the conditions that ships are subjected to.

When a ship re-enters the earth’s atmosphere, its capsule typically separates from the main, larger “bus” of the spacecraft, which burns up in the atmosphere. A hot “shock wave” of energy is created on the capsule’s surface, compressing the free stream of air and resulting in tremendous heat buildup on the capsule’s shield.

Leidy’s part in the operation was to maintain ASTRO, keeping it in focus and 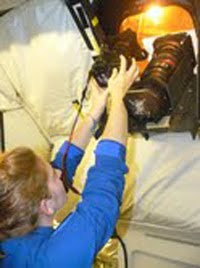 saving images to a laptop. ASTRO was limited in what it could capture in a spectral photo of because it has a fixed mounting in the airplane and the Itokawa was traveling too fast to be in the field of view for long. But ASTRO was able to capture one image of the re-entry when it was at its “hottest,” that is, a spectral image of the capsule as it caused a shock wave and as material coming off the surface of the capsule penetrated that shock wave. It also got five separate spectral readings on the disintegrating bus as it plunged toward the earth.

The color photograph at the top of the page, taken by Leidy and Ron Dantowitz, shows the spectral images of the capsule (left) and bus fragments (right).

In addition to working on the research, Leidy was able to witness the event through a window on the plane: “It was spectacular – one of the coolest things I’ve ever seen.

The preliminary results from the images showed the presence of sodium, lithium from batteries on the ship, oxygen, calcium and a carbon plus nitrogen compound which Leidy says helps analyze the heat from the re-entry. The data will eventually help researchers reconstruct how objects interact in the upper atmosphere and even help build better heat shields.

“I feel really lucky to have had the opportunity to work with an international team of established scientists, as well as being given the responsibility of the instrument like ASTRO,” said Leidy, who hopes for a career in astrophysics and planetary science. “It taught me so much more than an experiment in a laboratory could have.”

In fact, said Leidy, this type of re-entry research is hard to recreate in a laboratory because of the incredible speeds involved.

“These airborne observations are rare occurrences,” she said.

And as for the material collected inside the capsule during the seven-year journey to an asteroid that orbits somewhere between Earth and Mars? It’s back to Japan for analysis.