skip to main content
Return to Fordham University
You are at:Home»Faculty Profiles»Instructor Brings Music to the Science Lab
Parker’s anatomy class watching a live performance by one of their classmates. Photos by Ayesha Akhtar.
Instructor Jamie Parker’s human anatomy lab room 305 in Freeman Hall on the Rose Hill campus is filled with visuals of the human body. Posters line the top wall with diagrams of the different body systems. Each lab table has an organ model that sits in the middle. Human skeletons observe students from the corners of the lab.

But on a Tuesday afternoon in April, Parker’s lab students used their own bodies–and voices–to bring their anatomy lesson to life.

“Those are your judges. Everyone, ready? Who is going to go first?” Parker asks.

“This is so awkward,” says Nicole Margiotta, FCRH ‘21 biology and theology major, as she stands at the front of the room.

Then the beat drops. Her classmates, many of them biology majors, start bobbing their heads to Margiotta’s original lines from her number Bones on my Brain.

Yo, Let me rattle your incus, your malleus, and your stapes

As we learn all the bones God gave to you and to me.

I’ll spit this knowledge straight from my cranium into yours,

So hang tight like a hyoid for this anatomy tour…

The live music competition put on by the students was part of an assignment Parker gave to engage them deeper in the material. 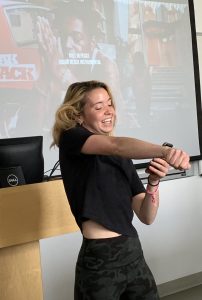 “I incorporate music in the classroom because, while I was learning, I felt something was missing. There is a disconnect in the way students receive information in academic settings,” said Parker.

Many of his students had never done anything like this in a classroom before.

“Never before have I had a music component for a college course, let alone a science class, so it was unique and refreshing.”said Nataliya Makhdumi, FCRH ’19, psychology major.

In the one hour of performances, the students found new horizons for themselves. Senior Noelle Chaney, rapped about her metatarsal to “Epic Trap Beat Dope Hard Hip Hop Rap Instrumental,” while sophomore neuroscience major Tess Durham, went for a full-on dance performance to a Kodak Black instrumental.

Junior Emily Haraden, a biology major, said that the competition was nerve wracking but worthwhile. “Making a song that made sense made us actually focus on something and figure out what systems and parts connect.” 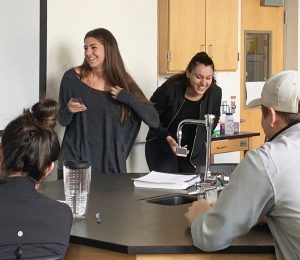 Mifsud & Makhdhumi, first place winners of the music battle, burst into laughter in the middle of their performance.

Parker has been working with Christopher Emdin, Ph.D., a professor in the Department of Mathematics, Science, and Technology at Teachers College on ways to make STEM courses more interactive and student centered. The focus for these courses has been on middle to high schoolers, but Parker felt college students could also benefit from a more interactive approach.

“It’s cool because it’s not structured like a normal lab would be,” said Aiden O’Keefe, a junior at Fordham College at Rose Hill. “You have a lot more freedom with what you’re doing so you can go at your own pace.”

Music helps students learn to express themselves to others, Parker said. Because of technology, students have access to a lot of content, but lose key social skills that are essential for networking.

And, he said, the competition component is key. It requires the student to direct their words towards someone else. This help with composure and confidence. 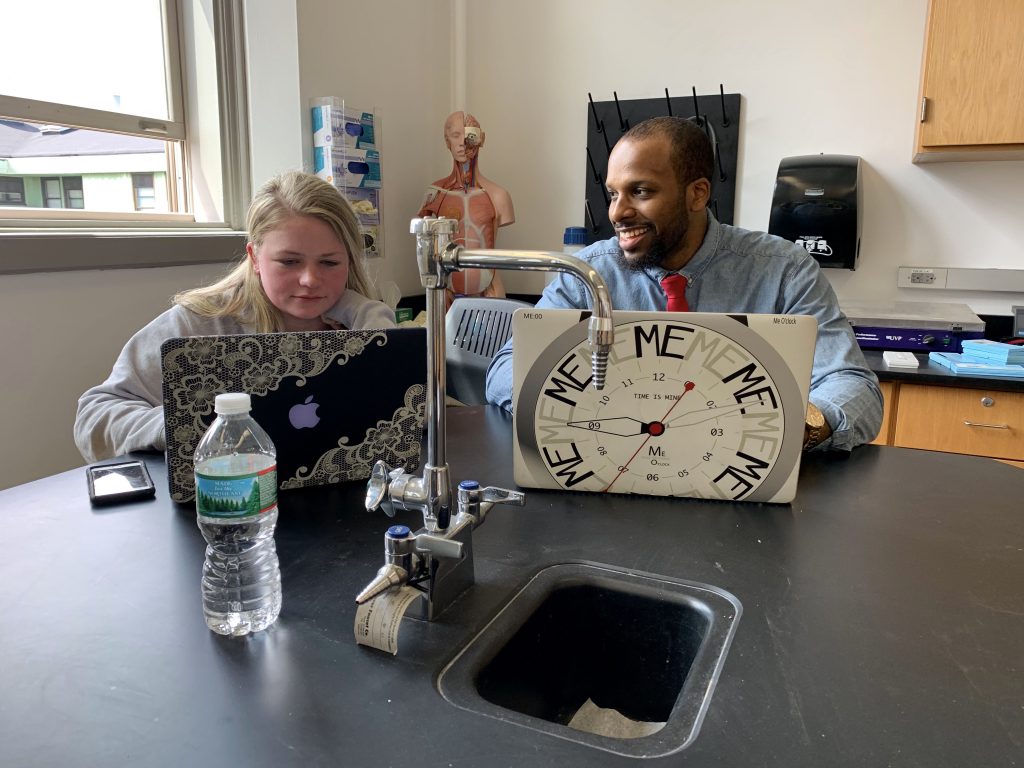 “It also helps them direct their love, joy, or pain to someone else in an effort to be heard and understood,” said Parker. “Sometimes people don’t have anyone to listen to them, and my goal is to let them know we hear you, and so do your classmates.”

Parker said he hopes these activities encourage students to think, as opposed to just regurgitating information. “My students are brilliant. I want them to have opportunities to be both creative and challenged in an academic setting.”