skip to main content
Return to Fordham University
You are at:Home»Colleges and Schools»Graduate School of Social Service»GSS in Partnership with NASA Astronaut

At the Graduate School of Social Service (GSS) diploma ceremony on May 22, Yvonne Cagle, M.D., a physician and astronaut for the National Aeronautics and Space Administration (NASA), urged graduates to take a new perspective on the world.

“When you look at Earth from space, you see many amazing things. But what you don’t see are borders,” Dr. Cagle said. “We have to create a new conversation in order to create a world without borders. It’s time to eradicate [them]from without.”

At GSS, that conversation has already begun.

In partnership with Cagle, Fordham has launched the Interdisciplinary Collaborative on Health, Environment, and Human Performance. The collaborative aims to pursue excellence and innovation in medical, behavioral, and environmental research, education, and technology development. 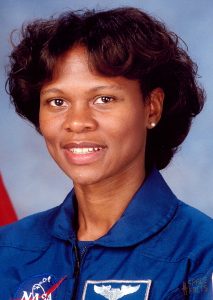 Operating under the auspices of GSS, the collaborative will promote interdisciplinary research across the University, as well as between the University and its external partners and communities; for instance, the Bronx Science Consortium. Debra McPhee, Ph.D., dean of GSS, will oversee the collaborative at Fordham, while Cagle will serve as a visiting professor at GSS. In this position, Cagle will offer her research and medical expertise and provide access to the innovative technologies and research capabilities of her professional affiliates.

“This partnership will offer unique research and learning opportunities not just at GSS, but for faculty and students across disciplines at Fordham,” McPhee said.

A partnership between Cagle and McPhee began long before the collaborative came into being. The pair collaborated on advanced technology projects in Silicon Valley while McPhee was serving as chief operating officer for an online health education and technology company in Palo Alto, California.

When McPhee became the dean of GSS in 2013, the two innovators saw an opportunity for continued collaboration.

“Fordham stepped up in a huge way to support that dialogue, and from there we approached the NASA Ames Research Center and shared our vision with them,” Cagle said. “They were equally supportive and very honored to be able to bring Fordham University into the relationship with the agency.”

Fordham researchers will have the opportunity to become involved with Cagle’s ongoing projects—such as NASA’s plans to send a mission to Mars, to dispatch a 100-year starship, and, ultimately, to initiate human exploration and settlement in deep space.

“We would need to look at the psychological, social, and behavioral dynamics that would go into long-duration exploration and even human colonization of other planets,” she said, noting the need for psychologists, political scientists, historians, and more.

While these missions may sound like mere sci-fi, Cagle said that undertaking them is not a matter of if, but when. Already, a handful of private sector enterprises are looking to industrialize space, including harvesting sustainable sources of space-based fuel and other resources, creating a space-bearing transportation system to obtain these materials, and even commencing space tourism.

“[NASA’s] plan is to look toward a Mars mission as early as 2030, which is right around the corner. And, within the next 18 months, we’re planning to place two NASA astronauts on the International Space Station for a one-year mission to see how they perform of the course of year, both physically and psychologically,” she said. “We’re racing the clock, but when your typical speed limit is Mach 25, we’re up to the task.”

Factoring psychosocial dynamics into these missions is so important, Cagle said, that the kind of expertise Fordham researchers could offer ranks as high as managing radiation exposure and maintaining crew health and fitness.

“At the core of these missions is a human element in partnership with robotics—but you’re always going to need the human there to make real-time decisions,” Cagle said. “That’s why the psychosocial and behavioral components that GSS deals with are right up there in the top three make-or-break challenges that we face when it comes to humans thriving in space.”

A key factor of the collaborative, McPhee said, is to open up opportunities “to compete for research funding not currently available to members of the Fordham community, specifically NASA research RFPs (requests for proposals).”

The initiative is contracted for three years, but McPhee and Cagle anticipate a long-lasting partnership.