skip to main content
Return to Fordham University
You are at:Home»Colleges and Schools»Graduate School of Education»GSE and Yonkers Public Schools Host Another Successful Round of STEM Labs 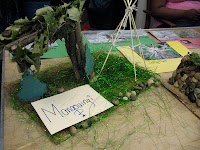 The survivors on Kochamonga Island
relied on the Mangouingi tribe for
knowledge of the island’s plant life.
Photo by Joanna Klimaski

You’re on an airplane, flying over a turquoise sea dotted with tropical islands. Suddenly, confusion erupts in the cockpit and the next thing you know is that you are in the water with the other passengers and the crew members. The group makes it to the island safely, but the plane is gone and, with it, all modes of communication.

That was the task charged to the seventh and eighth graders of the STEM (Science, Technology, Engineering, and Math) Summer Learning Lab, an enrichment program co-sponsored by the Yonkers Board of Education and the Center for Educational Partnerships (CEP) at Fordham’s Graduate School of Education (GSE).

Revolving around the theme of survival, the 17-day program, hosted by Paideia School 15 in Yonkers, offered 250 Yonkers students instruction in the STEM subjects.

“You can learn a lot with the theme of survival,” said Sylvia Branchcomb, principal of the STEM Learning Lab. “They learned about economics, about building, science, extinction, as well as history and math. All the different elements of a society come together—especially STEM subjects.”

The program concluded with a showcase held July 30 on the Rose Hill campus. The vibrant posters, maps, and dioramas displayed in the Duane Library’s Butler Commons featured fictional locales ranging from desert islands to the arctic.

Lost in the tropics, one class found themselves stranded on Kochamonga Island.

“We were on a plane and we ended up crashing and finding this island, so we all came together and made tribes,” Kaitlyn Matos, 13, said about her group’s project.

Another class found themselves stranded on Monkanas, a Galápagos island known for its preponderance of monkeys and bananas.

“We have spears, bananas to eat, cages, guns, and we made a fort,” said Cristian Ortiz, 13.

“It’s project-based learning, which looks at an issue, like survival… and then involves interdisciplinary activities,” said Ann Marie Ciaramella, assistant to the dean of GSE. “For math they learned things such as bartering and setting up a money system, longitude and latitude, distances, and the metric system. They learned how to research on the internet. For English Language Arts, they learned communication skills. And of course for science, which was at the heart of it, they looked at topics such as prey and predators, weather, and the flora and fauna on their islands and what they needed to survive.

“It got the kids to really think, got them to do research, to really listen to one another and have very good discussions,” she said.

The classes were taught by Yonkers public school teachers, who received 12 hours of training from CEP representatives and additional professional development each afternoon for the duration of the program.

“The teachers were really involved, and loved it,” Branchcomb said. “Everyone was engaged and the kids truly had fun.” 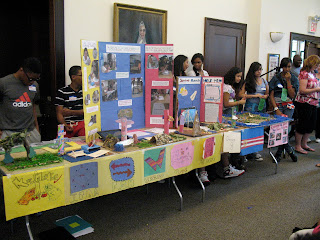 Students from the STEM Summer Learning Lab presented
their research at a showcase held July 30 in the Duane Library.
Photo by Joanna Klimaski