skip to main content
Return to Fordham University
You are at:Home»Colleges and Schools»Graduate School of Arts and Sciences»Graduate Student Makes Vision Care More Accessible with Smartphone App
Feature photo by Taylor Ha; other photos courtesy of Ciara Serpa
As part of her master’s thesis, Fordham graduate student Ciara Serpa is developing a phone app that anyone can use to detect eye diseases at an early stage. The project, which recently received $100,000 in funding from the National Institutes of Health and is being conducted with faculty member Mohammad Ruhul Amin, Ph.D., and startup company iHealthScreen, aims to help people who are at risk of losing their eyesight, especially those from underserved communities. 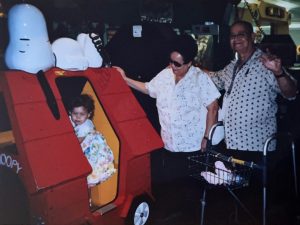 Young Serpa with her maternal grandfather, who has had myopia since childhood, and her step-grandmother, who is now completely blind due to a diabetes-related eye disease

“I’ve seen a lot of people go blind, including my grandmother, and there are a lot of direct and indirect costs that patients suffer from,” said Serpa, a data science student in the Graduate School of Arts and Sciences. “I want to make sure that people can see as long as possible.”

The idea for the project originally came from Amin, an assistant professor of computer and information sciences, and Alauddin Bhuiyan, Ph.D., the founder of iHealthScreen and an associate professor at Mount Sinai’s Icahn School of Medicine. While searching for thesis ideas, Serpa reached out to Amin, who then introduced her to his research with Bhuiyan.

“Many middle-aged people have diabetes, including myself,” said Amin. “They often develop eye problems, especially age-related macular degeneration (AMD) and diabetic retinopathy. These diseases spread slowly until they reach a stage where it’s difficult to recover, but if you diagnose them early, they’re easier to manage.”

Together, the three researchers are trying to build an app that uses artificial intelligence to detect these eye diseases at an early stage.

Serpa began her thesis last fall with initial research and interviews with neurologists and ophthalmologists, who shared what they thought was needed in their field. Then she visited health care facilities in the Bronx, where she recorded images of patients’ retinas with professional equipment, focusing on patients at least 55 years old and/or diabetic. The images were then uploaded to AI software that is being trained to identify signs of AMD or diabetic retinopathy and also sent to an ophthalmologist for diagnosis. Later, Serpa compared the results from the software and the ophthalmologist to see if they both agreed on a diagnosis. 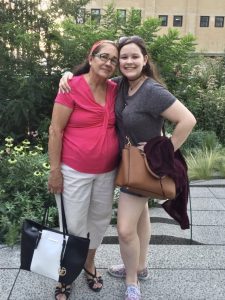 “The software uses machine-learning and deep learning to scan images, pixel by pixel, and search for specific spots that indicate a person is at risk and should be seen by a professional for further referral,” said Serpa. “Basically, we’re training the software to know what to look for in the data and to accurately diagnose patients.”

So far, Serpa has recorded and uploaded about 100 images. Her goal is to collect more than 500 images by the end of the study, but she says that most of the time, the ophthalmologist and the software agree on a diagnosis. And the more images processed by the software, the smarter it becomes.

“It’s like if you were to study for an exam and take 10 practice exams. If someone else takes 20, then that person might do better because they’ve practiced more,” said Serpa.

Finally, Serpa’s team will incorporate the software into a smartphone application in which anyone can take a photo of their eye and screen themselves for eye diseases at little to no cost.

“In the past, most researchers have used a separate camera or a removable smartphone lens instead of an actual iPhone camera, but those can cost a lot of money. We’re trying to see how accurate we can get with an iPhone camera,” said Serpa. “If people can’t afford to visit a doctor, this could be a good way to first let them know that they should see a doctor and get real imaging done because we see something that may be dangerous.”

A Cost-Effective Form of Diagnosis

After graduating from Fordham next spring, Serpa said she hopes to work full time in the medical technology field.

“A lot of people find databases boring, but I think it’s fascinating to find patterns in the data that can be important to a business or health care system,” said Serpa, who is originally from Monroe, New York.

She said she not only enjoys working with data, but also interacting with patients, many of whom she can personally relate to.

“As someone who has had a lot of chronic illnesses since I was young, I feel like I understand where they’re coming from,” said Serpa, who has asthma and has suffered from migraines and fibromyalgia since childhood.

Although her thesis will be completed by May 2023, she said she plans to continue her research post-graduation.

“In the long run, our goal is to create a cost-effective and accurate way to know that a patient is going to lose their sight, but also help them to retain some of it,” Serpa said. “Nothing’s going to reverse the damage; we can only slow down the process. But hopefully we can find a better way to detect these diseases earlier.”

An image of Serpa’s eye, similar to the images she has taken of patients