skip to main content
Return to Fordham University
You are at:Home»Inside Fordham»FordhamScience: Pigeons Lead the Way in Teaching Language Skills 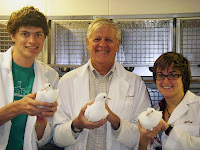 At Rose Hill a couple of pigeons are looking into ways to help learning disabled children and stroke victims learn (or relearn) vocabulary. Of course the pigeons don’t know that’s what they’re doing: they’re just pecking at keys to get food rewards, but Jim MacDonall, Ph.D., and his undergraduate researchers are watching them, and they’re taking notes.

MacDonall, a professor of psychology at Fordham, has recently started a new line of research in animal cognition, so-called “concept formation,” an essential precondition for language. 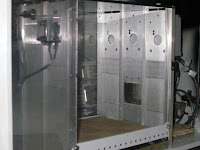 “For example, seeing the word ‘dog,’ hearing someone say ‘dog’ and seeing a picture of a ‘dog’ are all equivalent,” says MacDonall. “Language-able adults and children can readily substitute for one another. Only if pressed do we say the specific stimuli are different but the ‘concept’ is the same.”

Photographs
Top: (L to R) Peter Sanneman, Jim MacDonall and Anne Neuendorf with some experimental subjects.
Middle: The experimental apparatus.
Bottom: A White Carneaux takes a spin in the apparatus.

MacDonall’s pigeons, like young children, stroke victims and children with autism or learning disabilities, can’t readily connect the stimuli to the label. In experimenting with how pigeons can be trained to make certain associations, MacDonall believes researchers can develop strategies to better teach language skills to children and adults who otherwise have difficulty learning them. 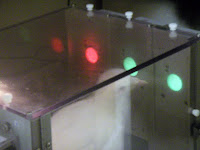 MacDonall uses pigeons (White Carneaux, from the Palmetto Pigeon Plant in Sumter, S.C.), because they’re hardy, long lived, have excellent eyesight and see colors. The pigeons are set up in their own room, with a separate ventilation system, as required by the Office of Laboratory Animal Welfare. The equipment and part of the renovation to animal room funded by a faculty grant through the office of Michael Latham, the interim dean of Fordham College at Rose Hill.

The experiment is simple: three circles can either be lit red or green. MacDonall trains the pigeons to peck the right- or left-hand circle that matches the color of the center circle (the birds aren’t actually matching the colors, in this case, but the pattern of colors). Each correct peck gets a food reward of mixed grain from a slot beneath the lighted circles.

Normally pigeons will make several hundred errors learning to peck the correct match, and their steady performance will be 85 to 95 percent correct. But preliminary results from MacDonall’s training scheme seem to show that pigeons can learn correct matching with fewer than 20 errors, and with a steady performance rate of about 97 to 100 percent correct.

What’s the difference? When the pigeons begin their training, they are only given the correct choice to peck (and of course rewarded when they do so). Once the pigeons reliably peck the target circle, the researchers introduce the wrong choice, but only for a fraction of a second. The bird has time to see the incorrect choice, but not time enough to peck it. Over time, the duration of time the incorrect circle stays lit is increased until it matches that of the correct choice.

MacDonall’s work has implications for how stroke patients who lost language ability should be retaught, and for teaching language skills to autistic children who have never had the ability to begin with. For adult stroke victims, relearning language can be very frustrating, and instruction is frequently delayed by outbursts of temper at getting the wrong word for an object the patient feels he or she should know.

The inherent frustration aside, MacDonall says the research on stroke recovery shows that the more quickly language skill is reacquired, the more complete it will be. Diminishing the time lost to aggressive outbursts increases the number of language lessons a patient can complete in a day. And that’s where MacDonall’s work comes into play: by giving stroke victims a more painless learning curve, they can potentially reacquire language more quickly and completely.

In teaching language skills to autistic and otherwise learning disabled children, MacDonall says if we can offer them an easier path to acquiring the skills, why shouldn’t we? “Kids don’t like to be frustrated, either,” he says.

The obvious question is, why hasn’t anyone thought of this before? MacDonall pauses for a long minute before answering.

“I think a lot of investigators don’t pay close enough attention to the details in the stimulus,” he says. “You need to pay very close attention to exactly what’s happening in the environment, and to the consequences of responding—to the reinforcement you’re offering.”

As for why techniques developed on pigeons should work as well in humans, MacDonall says “Most of the time it does. Conditioning applies across species, though you may find parameter differences: pigeons may require thirty seconds between trials, and humans only two.”

The next step, according to MacDonall, is to try and replicate his early findings with four more pigeons, then publish the results.

“Individuals who do not have language ability (developmentally disabled children and autistic children) and those who have lost language (some stroke victims) are in a very difficult situation,” MacDonall says. “We need to do everything we can to speed their learning or relearning of language.”
__________

The current undergraduate assistants in MacDonall’s lab are:

Over the summer, Sanneman and Neuendorf helped with the research discussed above, and were supported by an Undergraduate Summer Science Fellowship from FCRH. Nosal, Moran and LaRusso joined the lab this semester. Funds for equipment used in this research were provided by the Office of the Dean of Fordham College at Rose Hill.