skip to main content
Return to Fordham University
You are at:Home»Inside Fordham»FORDHAMScience: One Fish, Two Fish… 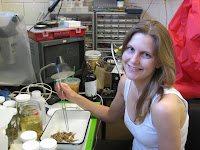 Biologists spend a lot of time studying tiny details to come up with the answers to big questions. Rose Carlson, assistant professor in Fordham’s Department of Biological Sciences, is making a career of darters, fish in the perch family that inhabit the rivers and streams of North America, and most species of which are under three inches in length.

Carlson, who took her doctorate in population biology from U.C. Davis, has logged thousands of hours in the lab and in the field taking note of minute distinctions between darter species from streams in the southeastern United States.

“I’m interested particularly in the diversity of characteristics that have some kind of important function for the species,” Carlson says. “In my dissertation work I focused on characters of the [darter]jaws that we know are going to affect what the species are eating. When you see differences among species in jaw shape you can infer with pretty high confidence that it correlates as in what they’re eating. And then when you put species with different jaw shapes in a community, you can then make another inference: which is that they’re all eating different things, and that perhaps this diversity facilitates coexistence.” (See: “The ecological morphology of darter fishes,” with Peter C. Wainwright, Ph.D.)

One aspect of Carlson’s research is looking at species coexistence and community assembly: how different species can populate a given habitat—in this case some very shallow streams in upstate New York, Tennessee and northern Georgia, to name a few. Small as these streams are, it’s the bottom inch or two that most concerns Carlson: that’s where darter habitat mostly lies, in a slower boundary layer between the streambed and the faster moving water above it.

Her post-doctoral work has focused on understanding the function of differently shaped and sized fins in darter fishes. Darters mostly hold their place on the streambed, eating what is directly in front of or very near them. Occasionally they will dart forward for a morsel of food, or to avoid a predator (mostly birds and bigger fish).

“They kind of sit, for a long time and then move very quickly, explore their area, dart again, sit. That’s kind of the cycle,” Carlson says. “They eat things that are on the bottom for the most part, on the sides and sometimes on tops of rocks—a lot of aquatic invertebrate larvae.”

Right now Carlson measures the maximum stream flow speed in which darters can stay in place. The fish are set up in Plexiglas recirculating flow tanks and given time to acclimate (“They’re freaked out when you first put them in there,” she says). The flow is generated by a propeller calibrated so that the researchers know the flow speed in the tank for set numbers of revolutions per minute. The tanks are filled and the researchers move the darters into a standard position, sitting on the bottom—holding station—and then slowly turn up the flow speed, from a very low speed up to the maximum speed at which the fish can hold position.

“You can see when they start to struggle to hold position,” Carlson says. “That’s one of the types of test that we would do. At other points, when we’re interested in visualizing flow patterns, we’re just interested in having the fish sit in a particular position for a long period of time, not necessarily at its maximum flow speed, just visualizing the water movement over the fin and over the substrate.”

The researchers capture the darters on high speed video. For some of the performance studies they have two views: lateral and dorsal, to capture motion from the side and top. “It’s all contingent upon them having the same type of locomotor behavior,” Carlson says. “If we find they have the same habitat and the same fin shape, that’s strong evidence that fin shape is somehow adaptive in that type of environment.”

The next step, according to Carlson, is to get out in the field and “really make very close observations on what darters are doing,” by measuring where they are in the habitat. She wants to get a better idea of how the laboratory findings translate to nature. That will mean lying in a stream (either in a wet suit or dry suit, depending upon the water temperature), at eye-level with the tiny fish. Carlson says a flow meter that will work in such shallow water is “going to require a little bit engineering and ingenuity… But that’s one of the fun things about fieldwork.”