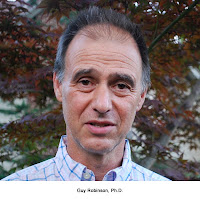 Sometimes the smallest of clues can pierce the largest of mysteries. One of the big (in every sense of the word) questions in paleontology is “where did the North American megafauna—mastodons, mammoths, giant sloths, giant beavers!—go?” The answer might come from a fossil spore too small to be seen with the naked eye.

The key to discovering why the giant herbivores died out may be when their numbers began to dwindle: about 14,800 years ago, according to a team of researchers that includes Fordham’s Guy Robinson. Their 2009 paper, “Pleistocene megafaunal collapse preceded novel plant communities and enhanced fire regimes,” is based upon the concentrations of fossil spores found in lake sediments in the Midwest and northeast.

Robinson, a lecturer in the Department of Natural Sciences at Lincoln Center, tracks Sporormiella, a fungus that produces spores which must pass through the gut of a large herbivore to germinate. The spores are between 9 and 12 microns in diameter (about one-fifth the diameter of a human hair), and are found in the dung of large herbivorous vertebrates like mastodons and giant beavers (did we mention the giant beavers?). Over time the dung would be washed by rain into lakes, where the spores, along with pollen and charcoal, collected in layers of sediment. 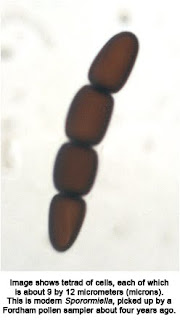 Lots of spores means lots of dung; lots of dung means lots of animals. Tracking the amount of spores, pollen and charcoal at different sediment depths allows the changes in numbers of large herbivores to be matched exactly to sediment records of vegetation and fire, which can in turn be compared with other archaeological and environmental records.

Beginning 14,800 years ago, the plant communities of North America started to change dramatically, going by pollen counts from the lake sediments. Robinson, who also oversees the Pollen Index at Fordham, saw a rise in novel or “no-analog” plant communities which had high percentages of temperate broadleaved trees such as ash, hornbeam, ironwood and elm coexisting with northern species such as spruce and larch—trees not found growing together previously, or today.

What do all of these clues point to? Butchered mammoth bones found in southeastern Wisconsin can be dated to between 14,800 and 14,100 years ago, indicating the presence of humans in the region at the beginning of the decline of large herbivores. One pretty good hypothesis is that over the period between 14,800 and 13,300 years ago, human hunters reduced the population of mammoths, mastodons and other large herbivores. As the herbivores declined, the trees on which they fed, broadleafs like elm and oak, increased, as did the amount of standing and dead wood and leaf litter available to fuel wildfires (and possibly fires set by humans for hunting and land-clearing purposes).

The archeological and fossil records seem to indicate that the population of large herbivores goes extinct altogether between 13,300 and 12,900, which corresponds exactly with the arrival of the Clovis people, big-game specialists named for their stone points first excavated in Clovis, N.M.

Robinson stresses that this interpretation of the record is somewhat controversial: other contenders for the decline and eventual extinction of the Pleistocene megafauna include climate change, an extraterrestrial impact, and disease or some combination of the three, as well as human predation.

But the decline of the large herbivores (as measured by Sporormiella concentrations) precedes the increase of no-analog plant communities. If climate change reduced the number of herbivores, it didn’t do so by changing the habitat. Likewise, the hypothesis that a meteor or comet slammed into North America approximately 13,000 years ago and killed the megafauna isn’t consistent with a gradual decline of the large herbivores, nor the timing of its beginning.

This summer, the Ecological Society of America (ESA) will present the William Skinner Cooper Award to Robinson, along with colleagues Jacquelyn Gill, John Williams, Stephen T. Jackson and Katherine Lininger for their paper, which ESA says “contributes to the fundamental understanding of ecological history in eastern North America.” The award will be given at ESA’s annual meeting in August, in Pittsburgh, Pa.

Meanwhile, Robinson and his colleagues are extending their research by sampling lake sediments in more locations. “The samples our paper was based upon were all from lowland sites,” Robinson says. “We’re now moving into higher elevations in the Shawangunk Mountains, and we’re starting to see indications that the decline in Sporormiella is what you’d expect if it was being caused by human predation: there is a lag in the decline in higher elevations because humans move into the richer lowlands first.”

More evidence to support the hunting hypothesis is also coming to light in sediments from the late Holocene, 200 to 300 years ago, Robinson says. The samples seem to indicate a rebound of large herbivores on a significant scale following Europeans’ first contact with Native Americans. Researchers hypothesize that first-contact epidemics essentially depopulated the continent, drastically reducing hunting pressure on wildlife.

Robinson believes that the data strongly supports human hunting as a prime cause of large herbivore declines and extinctions, but that it may take a while for scientific opinion to come around.

“Like the fact that Africa and the Americas were once joined, many things that seem self evident now were highly controversial when they were first proposed,” he says. “That pre-historical, pre-agricultural people could have such a profound effect on their environment may be hard for people to accept for reasons that have nothing to do with the data.”