skip to main content
Return to Fordham University
You are at:Home»Inside Fordham»With Smartwatch Development, Fordham’s Sensor Lab Takes Apps to the Next Level

Imagine that you need an echocardiogram to test whether you inherited any genetic heart abnormalities.

When you go to your doctor’s office for the test, everything comes back normal. But lurking somewhere inside, there is, in fact, an abnormality—it just did not occur during your office visit.

“You’re out of luck,” said Gary Weiss, Ph.D., an associate professor of computer and information sciences.

However, Weiss said, if the capability to monitor your heart were built into your smartphone, “you could be monitored over a longer period of time, as opposed to just a few minutes, which provides a lot more data.”

With the advent of smart technology, that capability has become a reality. Originally designed to give doctors access to patients in remote, rural areas of developing countries, mobile health platforms have since proliferated. In just seven years, these devices have grown increasingly more complex. They can now accomplish tasks as simple as counting the number of steps you take and as sophisticated as checking glucose levels in your blood. 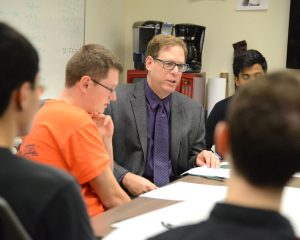 Gary Weiss, director of the Wireless Sensor Data Mining Lab, works with his students to integrate their Actitracker app into smartwatches. (Photo by Joanna Mercuri)

Weiss, who is the director of Fordham’s Wireless Sensor Data Mining (WISDM) Lab, has been making a foray into the field of mobile health by applying his research on activity-recognition to the newest member of the “smart” family, “smartwatches.” The WISDM lab’s latest work builds on the Actitracker, an application (“app”) for Android-based cell phones that the lab launched in 2013.

Using a built-in sensor called an accelerometer, the app detects and identifies the user’s physical activities, such as sitting, walking, jogging, standing, or climbing stairs. It then compiles the results so that the user knows how many minutes per day are spent sitting, standing, etc. When the app “learns” the nuances of its user’s movements using a built-in “self-training mode,” it yields results that are up to 98 percent accurate.

“The project was funded because of its potential to help combat obesity,” said Weiss, who received a National Science Foundation “Smart and Connected Health” grant for the project. “But it can really help with a lot of issues. For instance, tracking how someone walks could detect if they have any gait problems. Or we might be able to track depression if someone is spending the majority of the time lying down.”

Integrating Actitracker with smartwatches will make the app even more sophisticated, Weiss said, because it will be able to detect activities such as eating or drinking.

“A smartphone in your pocket is limited, because it really can only detect your leg motions, specifically the top of the legs. The smartwatch, though, will also be able to detect hand motions to identify activities like eating and drinking,” Weiss said.

For those who need to monitor their diets, having an app that can call attention to food intake can be invaluable. For instance, Weiss said, when the watch detects that you are eating, it could prompt you to add an entry to your food diary. Or, when it detects that you are drinking something, it might ask about the sugar content of your drink and advise accordingly.

Smartwatches arrive at the WISDM Lab

Sophomore Andrew Johnston is one of the students working on smartwatches in the WISDM lab. 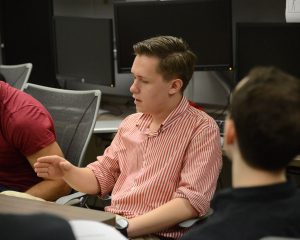 “The accelerometer and gyroscope give feedback in terms of the number of steps you’re taking and there’s also a heartbeat sensor to take your pulse throughout the day,” said Johnston, a computer science and mathematics major.

“No one is doing activity-recognition with smartwatches right now, so we’re looking to corner the market there.”

Johnston is also doing research in biometrics, the study of distinctive, measureable human traits such as fingerprints or DNA. Johnston’s research focuses on using biometric markers for identity and security purposes—in other words, using things like voice or gait recognition in lieu of passwords.

“The problem with passwords is that they’re really weak,” Johnston said. “People who come up with them design them to be memorable. Which means that most of the time they’re also guessable.”

The process involves just a few steps, Johnston said. For instance, if you wanted to program a smartwatch to open a locked door using gait recognition, you would first demonstrate to the watch how you walk. Then the watch and the door would be programmed to associate your particular gait with the action “unlock door.” Thus, when you approach the door, the watch and door compare your walk with the profile on file, and if they match, the door unlocks. 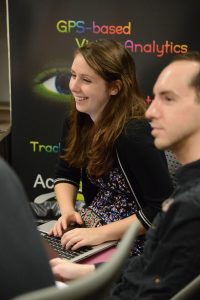 Sophomore Catherine Gallagher is an Android development assistant in the WISDM Lab. (Photo by Joanna Mercuri)

“Moving to biometrics would make it more difficult for someone to get unauthorized access, because it’s a lot harder to guess how I walk than to guess something I use as my password,” Johnston said, adding that biometrics could ultimately be used for social media profiles and even electronic bank accounts.

Currently, the team is conducting experiments with the smartwatch and plans to have it integrated into the Actitracker app within six months. In the meantime, Weiss has submitted another grant proposal to the National Science Foundation to continue expanding their work with activity recognition—including integrating the app with social media so that users can broadcast their results.

“There are companies interested in this type of technology. Some startups have contacted us,” Weiss said. “All of this is now becoming technologically feasible because of the ubiquity of these powerful devices.”