Cities are not just hotbeds of human activity. They are also changing the way plants and animals around the world evolve.

“Traditionally, we’ve thought about evolution as a long-term process that happens in relation to natural environmental features and the interactions between species. But now there is one phenomenon that is rapidly changing many other species, which is how they interact with humans and our built environment,” said Jason Munshi-South, Ph.D. 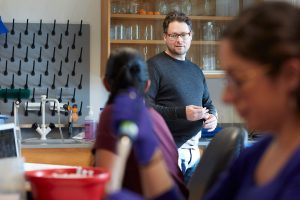 “Humans and our cities are one of the most dominant forces of contemporary evolution now.”

In “Evolution of Life in Urban Environments,” a paper by Munshi-South and co-author Marc T.J. Johnson, Ph.D., published today in the journal Science, the researchers cite direct evidence of evolutionary change among more than 100 species living in cities around the world.

While it has been observed since ancient times that certain animals—rats, pigeons, bedbugs, roaches, and mosquitoes, for example—adapt to the presence of humans, the number of recent studies confirm this phenomenon is widespread among species. A majority of the studies that Munshi-South and Johnson examined have been published in just the last five years.

In “Evolution of Life in Urban Environments,” Munshi-South and Johnson show how the study of urban evolution has been documented in cities all across the globe. In this accompanying map, blue silhouettes represent the approximate regions of origin of species that have adapted to humans since ancient times. Black silhouettes represent locations where urban evolution of species have been studied.

From Isolation to Divergence

Their research reveals that a significant number of species have become isolated in cities, in either pockets of habitat that have survived or in other spaces they’ve adapted to. Urban species have diverged from other populations through multiple evolutionary processes such as genetic drift and natural selection. They have also become different not only from populations in the more rural surrounding environments, but from other urban populations of the same species.

Munshi-South said the studies raise more questions than answers, but they also hint at some intriguing possibilities.

“In some of the more recent studies on selection that have looked at the same organism in multiple cities, there seems to be this tantalizing pattern of correlated changes across cities,” he said.

“We see cities as these amazing evolutionary experiments. Some species occur in many cities all over the world, and all of those populations may be evolving in the same direction. It implies that there is some directionality and repeatability to the evolution process. There haven’t been good ways to study that outside of the laboratory or [some]small islands in the Caribbean.”

Munshi-South’s own research on rats in New York City has shown that rats living in lower Manhattan are genetically different from their relatives further uptown—likely because traveling through the habitat of midtown skyscrapers is more difficult for the colonies. Urban white-footed mice found in places like the New York Botanical Garden or Central Park also exhibit genetic changes for digesting fats and carbohydrates, compared to their rural counterparts.

Johnson studied the white clover plant, which produces cyanide as a defense against feeding animals, but which is poisoned by its own cyanide if the plant freezes. Survival depends on a cover of insulating snowfall in the winter. In North American cities where there is less snow cover to insulate the plants, however, Johnson found that white clover has evolved to produce less cyanide than its rural counterpart.

The researchers suggest in their paper that urban planners embrace management and design practices in cities, such as “green belts,” to help native species thrive and to mitigate disease-carrying pests.

Munshi-South said the large number of urban evolutionary biology studies that have come out recently proves that the field has become a coherent discipline in its own right.

“It started out with people, like Mark and me, studying organisms that were living near our urban universities. We started noticing changes—some small, some significant—right in the back yards of our labs,” he said.

“And they seem to be driven by changes happening in the city.”