skip to main content
Return to Fordham University
You are at:Home»Inside Fordham»Fordham Jesuits Lead Celebration of Life for One of Their Own 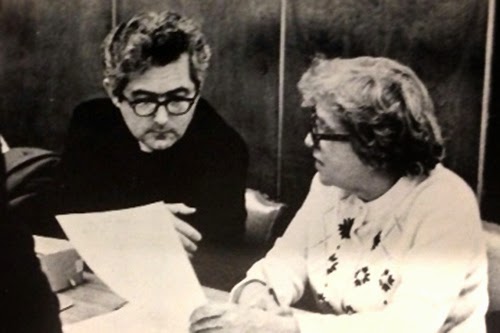 Father Hegyi in 1974 with then biology chair Ruth Witkus, Ph.D.

For a brief moment on Jan. 21, the swirl of snow on the Rose Hill campus served as backdrop to the foundational Jesuit spirituality. On that day, as a massive storm threatened to shut down the city, a Mass of Christian Burial was celebrated for Father Márton (Martin) A. Hegyi, S.J., a longtime member of Fordham’s Jesuit community and a faculty member in the Department of Biology, who died on Jan. 17 at Murray-Weigel Hall. Fifteen of his Jesuit brothers flanked his casket and guided him from the University Church for the last time.

Tradition would normally dictate that the Jesuits sing Salve Regina just outside the church doors, but the snowstorm halted the procession at the vestibule. There, the celebrants sang in ancient cadence as the casket was hoisted onto shoulders and the bell tolled. The doors flew open and Father Hegyi was carried from the darkness of the church interior out into the white storm.

Born in Hungary on October 15, 1932, Father Hegyi entered the Society of Jesus in 1952. By several accounts at the service, his decision to remain with the Jesuits came at a tumultuous time in Hungary’s history—and at no small risk to his personal safety. 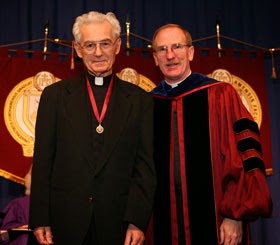 Joseph M. McShane, S.J., president of Fordham, described Father Hegyi’s escape from the Communist Hungary as “harrowing and heroic,” but not a story that could easily be coaxed from him.

The fact that he was reluctant to discuss his personal experience came as no surprise to those who knew him, describing him as a man more inclined to listen to others, than to talk about himself.
Ladislas Orsy, S.J., said that Father Hegyi “emanated a radiant goodness” and was possessed of three cherished qualities: simplicity, fidelity, and magnanimity.

“His simplicity of purpose was on view for all who came in contact with his fidelity, of whom there were many,” he said, adding that even magnanimous giving was closely tied to his ability to receive and listen to people.

After leaving Hungary, Father Hegyi received his bachelor’s and master’s degrees in zoology from Oxford University.  He received his doctorate in biology at the University of Tennessee at Knoxville in 1973.  His research centered on molecular biology, more particularly on Holopedium, a zooplankton found in the Great Lakes.

His time at Fordham began in the Department of Biological Sciences in 1967. He once described his primary academic challenge as “bridging the tension between science and religion.”

“It was never just biology for him, it was about creation,” said Cheryl Badolato, FCRH ‘78, GSAS’82 who served as a teaching fellow under Father Hegyi and to whom he teasingly referred to as “my penance.”

His quiet charm drew drew fellow biologists to the University as well, said Amy R. Tuininga, Ph.D., associate professor of biology and dean for strategic initiatives at the Graduate School of Arts and Sciences.

“There was something bigger that came from him than from your average human being, a certain power, serenity, and peacefulness,” she said. “He made you feel that there was more than just the biology that you were studying, and that your job as a professor was to look out for your fellow human beings.”

In 1996, on the occasion of receiving an award for excellence in teaching, Father Hegyi was described by Father McShane as “a consummate educator and a gifted mentor” who “introduced countless Fordham pre-meds to the mysteries of general biology.” In 2007, as Associate Professor Emeritus of Biology, he received the Bene Merenti award for his 40 years of service to the University. And in 2009, due to failing health, he moved to Murray-Weigel, the Jesuit infirmary abreast of the Fordham campus, to undertake his new mission of prayer for the church and the Society of Jesus.

In the end, the Jan. 21 Mass celebrated Father Hegyi’s total of 61 years as a Jesuit and 50 years as a priest.