skip to main content
Return to Fordham University
You are at:Home»Inside Fordham»Fordham College at Lincoln Center Students Show Off Research 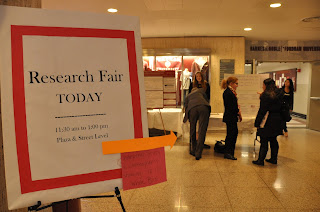 The plaza and street level of Lowenstein Center were abuzz on April 11 as 42 juniors and seniors from Fordham College at Lincoln Center (FCLC) shared their research with the Fordham community.

The research fair, which was followed by an awards ceremony, featured topics in humanities, sciences. and visual and performing arts.
Molly Clemens, a junior from Rochester majoring in environmental science, was stationed on the plaza to discuss “Drought Creates Stress Memory for European Beech Trees,” which she worked on at the University of Bayreuth, Germany.
A DAAD Rise scholarship enabled her to travel to Germany last summer, where Laura Nagy, a Ph.D. candidate at the University of Bayreuth, served as her mentor.
Clemens’ research concerned whether or not European Beech trees have the ability to adapt to a drought and survive a second drought better. 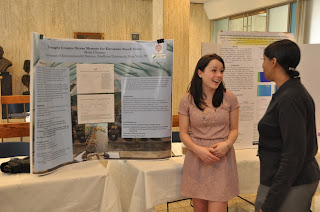 “We set up four different control groups using 60 beech trees, and we subjected them to four different regiments of water-we had a control drought, a control for the control, and then the double drought,” she said.
“What we were able to see is that the double drought plants were able to recover better and survived better than the control drought plants did that did not undergo the first draught.”
Clemens hopes to build on this research with a Fulbright scholarship that she is applying for in Australia. She also worked on two other projects in Germany, where she was given a lot of leeway to choose how to approach research.
“The other project was a biodiversity project assessing the biodiversity of grasses, so we would spend long hours smelling grasses and biting them and feeling them, because it’s actually very hard to distinguish between them if you just have a pile of grass,” she said.
“It was very hands-on science.” 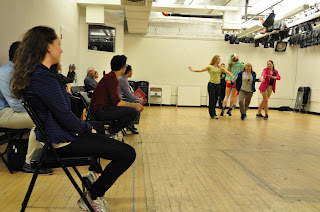 Lauren Vogelstein observes Ailey/Fordham BFA students performing her dance “I think I heard you say that once.”

Down on the street level, Lauren Vogelstein was showing off an independent study in choreography. Vogelstein, a senior Ailey/Fordham BFA student from Chicago, presented a demonstration of the dance “I Think I Heard You Say That Once,” which she described as the culmination of four years of trying and failing to create something she was truly happy with.
“I’ve learned what my teachers have been telling me all along, which is that you have to let go of the preciousness of your work in order to create something you really love,” she said.
Vogelstein is also earning a bachelor’s of science in mathematics and will be working at the Museum of Mathematics after graduation. Although she has done formal mathematical research with one of her professors, she chose to present dance at the fair.
“I thought it was important to show art in a context as research, because I don’t think a lot of people think you can do research in the arts, so I wanted to bring that to the fair today,” she said. 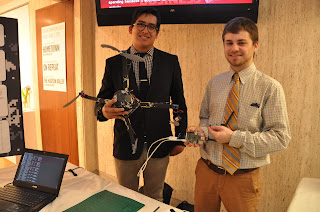 Cody Brown and Nick Espinoza show off their UAV, which is capable of analyzing wireless networks from the air.

On the ground floor by the Center Gallery, were Cody Brown and Nick Espinoza, seniors majoring in computer science and political science and information science, respectively.
“Bridging and Observing Wireless Services for Electronic Reconnaissance,” or BOWSER, involved the construction of a rotor-driven unmanned aerial vehicle (UAV) capable of wireless access reconnaissance barnstorming and penetration testing.
“We picked a drone to utilize the city’s uniquely vertical environment to go up and down apartment buildings, where you’ll find a lot more wireless networks than you would in a flat area,” said Brown.
“Let’s say you’re a contractor. You can test for security flaws in company enterprise networks, or just have fun and map out networks around you.”
Espinoza, who hopes to work in cyber security upon graduation, touted their UAV as a unique solution to a very real problem with penetration testing.
“You can’t exactly see these wireless networks. You might have to go into the building and access the floor,” he said. “Why would you take the elevator, and talk your way past security, when you can fly your way right up next to it?” 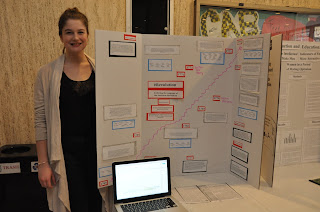 Jamie Juchniewicz, a junior anthropology major, addressed the past for her project “Revolution: The Vocabulary of the American Revolution.” What topics, she wondered, would have trended the highest  if Twitter had existed in the American colonies between 1763 and 1776?
For her project, which she hopes will help her continue onto graduate school, she took five of the most popular American pamphlets from each of the years, from 1763 to 1776, and ran them through Voyant, a processing software that calculates the most used words.
“When we start out in 1765, we’re only seeing the word “American” two times, and when we end in 1776, we see the word “American” 12 times. The colonials are seeing themselves transforming from, ‘I’m a member of this colony,’ ‘I’m a member of the Maryland colony,’ ‘I’m a Pennsylvanian,’ ‘I’m a New Yorker,’ into seeing themselves as an American, because they’re all sharing the same language,” she said.
Words like “authority” and “fame” highlighted the power of the individual, especially going into the revolution, she said. “So you can identify all the main actors by the words they’re using and the political activities that followed the language.”
Fordham College at Lincoln CenterLowenstein Center
Share. Twitter Facebook Google+ Pinterest LinkedIn Tumblr Email