skip to main content
Return to Fordham University
You are at:Home»Campus Locations»Fordham Brightened the Bronx with Early Electric Light 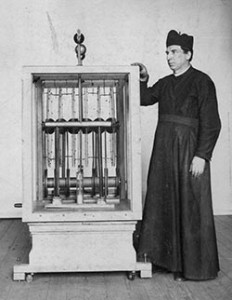 Thomas Freeman, S.J., was the leading scientific authority at Fordham in the 1880s.

In the 1880s, a few enterprising Fordham Jesuits sought to take the biblical edict “Let there be light” just a bit further.

Nearby, lower Manhattan was lighting up with a new kind of illumination powered by electricity. But electrical lines ended below 59th Street, and it would be more than a decade before they reached the Bronx, where the tenebrous 19th-century night was lit only by the feeble glow of oil lamps, gas lights, and candles.

So the college’s Jesuits made their own power instead. With the installation of a generating plant on the site (then named St. John’s College), they powered light bulbs across the campus and quite possibly inaugurated the Electric Age in their rural region, according to research by two Fordham professors.

“It could be this is the first electrification in the Bronx. We don’t know that anybody else beat us to it,” said Allan Gilbert, PhD, professor of anthropology and coauthor of an article on the project, appearing in the latest issue of the Bronx County Historical Society Journal.

While some local millionaires may have installed electricity in their homes, the Fordham project was “almost certainly” the area’s first large-scale project, said coauthor Roger Wines, PhD, professor emeritus of history.

Their article portrays a heady time when an exciting industry was being born. A 20-block stretch of Broadway was lit up by arc lighting in 1880, and parts of downtown Manhattan were being wired to a generating plant established by Thomas Edison on Pearl Street in 1882. Competitors were springing up, offering innovations like portable “dynamos” that could generate power on-site, beyond the established grid. Everyone wanted the new technology.

“Electrification was a big deal. It was big news,” Gilbert said.

Its appeal was evident at Fordham. Candles and fuel-burning lamps provided only a dim, flickering light and emitted heat, smoke, haze, or particulates, which made for hard studying during the long nights of fall and winter. “It’s sort of like everybody just went camping all the time,” Wines said. Most simply did without and spent the evening in shadows. 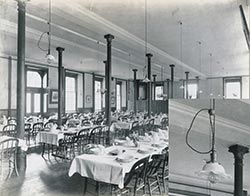 Light bulbs are suspended from the ceiling in this room in Faculty Hall, today’s Dealy Hall.

Meanwhile, the sciences were sprouting on campus, led by Thomas Freeman, S.J., who established laboratories and special collections and helped plan for the science building envisioned by the college’s president, Patrick F. Dealy, S.J.

“The college was already very much oriented toward science, and [electric light]was a practical aspect,” Gilbert said.

Finished in 1886, Science Hall would later be named Thebaud Hall; today, it houses administrative offices. It had a generating plant in the basement where Freeman installed a Weston dynamo, bought from the United States Electric Lighting Company for $3,154. It was powered by a steam boiler, which heated campus buildings via newly dug tunnels that were also used to extend electric wires across campus.

By November 1889, electric lights were installed in most outdoor areas and in all the principal campus buildings, where they usually hung from the ceiling. They were turned on for about six hours a day, ending at 9:15 p.m.

It was seen as wondrous. “The whole campus was lit up, and you could see your way from building to building,” said Wines. He said one student quipped “‘It’s even easier to study Greek with electric light.’”

The college generated its own power until connecting to the city’s expanding power grid in 1908.

The professors’ research grew out of their excavation of Rose Hill Manor, the early campus building constructed in the Colonial era, the foundations of which are partially covered by Collins Hall. Among many other artifacts, they found pieces of an early light bulb. They’re planning a book on all that they found while doing the excavation from 1985 to 2002.

Wines said the college’s leaders entered the Electric Age cautiously. Although the new electric light was exciting, they left the buildings’ gas lighting apparatus in place—“just in case this new thing doesn’t work out.”