To heal the soul, first understand the mind.

That’s the driving force behind a large number of pre-med students and alumni who have made theology a major component of their studies, with some going so far as to major in both theology and biology.

“The cruel reality of medical school admissions is, once you get to the door of your interview, no one wants to talk to you about how you did in biochemistry,” said Ellen M. Watts, assistant dean for pre-health professions advising.

“That’s just your foundation to get in. Then it’s very much a people-person field. The student who has a 4.0 GPA and 120 credits of science, who has never taken their head out of the book, is really not going to be successful going into this profession.”

Psychology and philosophy are also popular choices for students looking for another major to pair with biology, she said. Often, students choose to add another major to their workload after being exposed to it their freshman year. 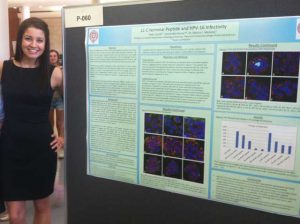 That was the case for Taylor Jacob, FCRH ’14, who attended Fordham on a full scholarship, majored in biology and theology, and is now working toward a doctorate in Christian bioethics as part of a Fulbright fellowship in Scotland.

A theology course titled Vocation of the Health Care Provider exposed her to the human side of medicine, and inspired her to take a medical ethics class, she said. Her research examines access to womens’ health care in Catholic hospitals, and how it compares to access in other health care systems.

“The trends in medicine today are moving away from just understanding the pure sciences toward trying to understand the person as a whole, which I think a Jesuit education is pretty well suited to do, given the whole message of cura personalis,” said Jacob. She said she plans to enter medical school and work in pediatric medicine.

In his freshman year, Brandon Mogrovejo, FCRH ’15, who is enrolled in Columbia University’s College of Physicians and Surgeons, likewise found himself enthralled with a subject that he “never in a million years” imagined himself being interested in— African-American studies. He chose it as his major along with biology, and he also minored in theology. He said he was energized by the back and forth among the courses he took.

“I was blown away by how philosophical the theology courses were. They asked questions about why we believe in God, and why certain religions revere a godlike figure at all. I really like asking those questions,” he said.

Although science and religion are often pegged as being at odds with one another, they’re seen as more complementary for students who’ve embraced as their vocation the healing of strangers’ bodies and minds. 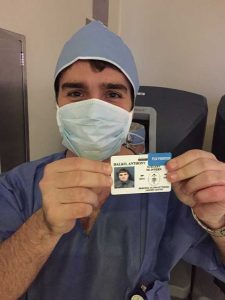 Anthony Halko, a Fordham College at Rose Hill senior majoring in theology and integrative neuroscience, said his studies have given him the ability to critically compare Christianity’s creation story and Darwin’s theory of evolution. He can understand the ways in which the former is useful, even if not interpreted literally. A volunteer fire fighter and a member of Fordham University EMS, Halko hopes that a theology background will allow him consider how best to treat patients in a way that benefits their psyche as well as their body.

Alyssa Ammazzalorso, FCRH’ 15, a Presidential scholar who is in her second year at Albert Einstein Medical College after majoring in biology and theology, is well acquainted with how the two fields complement each other—her father chose the same path and became a doctor.

“I’m very interested in biology and the mechanisms of life, and theology gives a meaning to life beyond those mechanisms. It’s two ways of looking at life, and you can’t just focus on one or the other in order to have a full appreciation of what life is,” she said.

In fact, Watts said the medical field has been pushing schools to teach pre-med students to excel in humanities for the last decade. In 2015, the MCAT exam even included sections on sociology and psychology. Medical schools want students who are able to deal with patients of different races, religions, cultural backgrounds, and emotional states of mind ethically, and can respect their experiences and their sense of self. 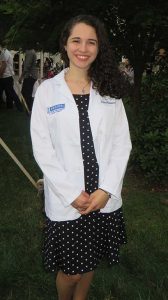 For Alyssa Ammazzalorso,FCRH’ 15, biology and theology are like two sides of a coin—different ways of looking at the mystery of life.
Contributed photo

Theology department chair J. Patrick Hornbeck, D. Phil., noted that when the department redesigned the major in 2010, it created a specialization in the relationship between faith and culture. It now offers courses with potential pre-med students in mind such as Introduction to Bioethics, Vocation of the Healthcare Provider, and Moral Aspects of Medicine, Death and Dying.

“Theology courses provide students with the opportunities to ask questions about the ethics of medical care, the relationship between medical care and spiritual and religious beliefs, and about what it means to be human in some of life’s most defining moments,” he said.

“Future physicians and other health professionals who have a grounding in theological disciplines will be able to be more compassionate, more thoughtful and more empathetic towards those they care for.”

Jacob said that theology helped her to pay attention to what people believe at the highest level, and how important it becomes in creating a plan for the health of an individual.

“You have to take [what people believe]into account. If you tell them something that conflicts with their deepest beliefs, it’s going to be wasted time,” she said.