skip to main content
Return to Fordham University
You are at:Home»Science»Computer Science Department Hosts Coding Bootcamp for Students Underrepresented in Field
Faculty members from Fordham and the Stevens Institute of Technology took part in a panel discussion on April 23 about the importance of diversity in the field of computer science.
In the world of computer science, the representation of women and people of color is lagging in a major way. According to federal statistics, for instance, just 8.9% of the more than 71,000 bachelor’s computer science degrees awarded in 2017 went to Black students, less than 13.4% that they represent in the total population.

The 2021 Tri-State ExploreCSR workshop, which began in February and wrapped up last month, aims to fix that.

The workshop brought together students and faculty from Fordham, the Stevens Institute of Technology, the University of Connecticut, and Google to learn or brush up on coding and computer science-related research. On April 23, the group celebrated with online presentations, a panel discussion, and poster board presentations on team projects.

Funding and Participation from Google

Ying Mao, Ph.D., an assistant professor of computer science at Fordham, said the project, which was funded by an $18,000 grant from Google, was created to break down barriers that students from all underrepresented populations might feel are keeping them from entering computer science.

“When we wrote our proposal, we actually broadened the domain of who we wanted to offer it to; usually it’s just for women. We included first-generation students who might not have imagined doing something in computer science,” he said.

The April event not only brought the students together, it allowed them to hear from experts in the field. It started off with a keynote address, Combinatorial Fusion Analysis: A new paradigm for combining multiple scoring systems, which was delivered by Frank Hsu, Ph.D., the Clavius Distinguished Professor of Computer Science at Fordham. He was followed by Adam Michael Wood of Google, who talked about Tensorflow, an open-source software platform that can be used to create machine learning models.

Organizers put out the call for the in the beginning of the year and received 220 applicants from undergraduate students enrolled at 16 colleges throughout the tri-state region. Some were computer science majors looking for research opportunities; others were non-computer science majors. After an initial meeting on Feb. 22, the 58 chosen students were divided into 18 groups that met weekly to report on their progress.

“Some of the research is very introductory level because the students are not from computer science backgrounds. One of my students was an economics major, so we designed a beginning research project so they could learn what computer science research looks like, to help them build self-confidence,” Mao said.

“They all showed how they learned to code and analyze the data, and since every group contained at least three students, how learned how to communicate with each other to build the project.”

Collaborating with Students from Other Universities 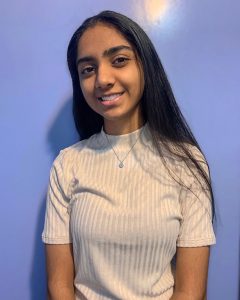 One of the students who attended was Navpreet Kaur, a junior at Fordham College at Lincoln Center. A math/economics interdisciplinary major, Kaur got involved in the field in earnest this fall, when she took her first class as part of a computer science minor. Under the guidance of Fordham’s Juntao Chen, Ph.D., the Ozone Park, Queens, resident worked with fellow Fordham student Maria Jara, as well as a student from Carnegie Mellon University and one from Hofstra University. Their project was titled “Fairness and Privacy in the Optimal Transport for Resource Allocation.”

The project involved applying a mathematical model used to determine how to allocate resources such as workers to places such as factories and mines so that they’re allocated fairly as well as efficiently. It’s the kind of formula that could also be applied to the distribution of vaccines.

“It seemed like a good opportunity to get experience, which I thought would help with internships or grad school, and just understanding how comp/sci really works,” she said.

Participating in the program introduced her to Fordham’s STEM program, and Kaur said she wants to take Dr. Chen up on the offer for more research opportunities next year. Working on the project made her feel confident that she’d be ready to participate in a larger research project that otherwise might seem overwhelming.

“I’m also glad we did it virtually since we were able to work with students from different universities with different backgrounds and different years,” she said. Working together with people with different experiences was very helpful.”

Mao said he plans to apply again for the grant next year and hold another workshop at a date to be determined.