skip to main content
Return to Fordham University
You are at:Home»Colleges and Schools»Graduate School of Arts and Sciences»Climate Change Drives Fast Genetic Changes in Plants, Study Finds
Steven Franks is lead author of a new study about how plants can quickly evolve in response to climate change.
A new Fordham-led study shows how a plant species can quickly change at the genetic level because of tough environmental conditions driven by climate change.

The changes came in just seven years, according to the study published this week in the journal Molecular Ecology and led by Fordham biology professor Steven Franks, PhD. It’s just the latest example of how organisms can evolve more quickly than was generally thought possible, he said.

“Previously, people generally thought that evolution was always a really slow process, but more and more lately over the past decade or so, there’s been a lot of examples of evolution happening really rapidly,” he said. “[It] can happen while we study it.” 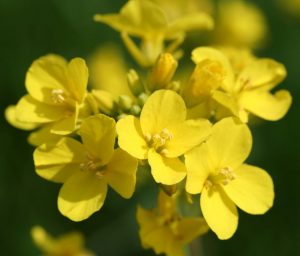 Franks has been studying changes in the behavior and genetics of the mustard plant, Brassica Rapa.

The study builds on Franks’ earlier study that he said was the first documented example of a natural plant population rapidly evolving in response to a natural change in the climate. The study found that field mustard plants in Southern California evolved to flower earlier in response to a drought that lasted from 1997 to 2004.

For the latest study, the researchers sequenced the genomes of pre-drought and post-drought plants from the first study to see how the post-drought generation was genetically different. They found hundreds of genes had rapidly evolved in response to the drought, many of them involved in traits like flowering time and stress response. The plants that flowered earlier were either more likely to survive the drought or to have a greater number of offspring, Franks said.

The study shows the value of comparing generations of species over a shorter time to study changes that are genetically based, he said.

“If you just watch the populations over time, then the traits might be changing, but maybe the organisms are just changing the traits themselves in response to the environment; [maybe]it’s not an evolutionary change that’s passed on from ancestors to descendants,” he said.

“This study allowed us to show that there really were genetic changes and we could see what they were,” he said. “By putting those ancestors and descendants in common conditions we could have more direct evidence that it was an evolutionary change.”

They also carried out a “heritability” calculation to see the degree to which traits were passed on.

He noted other studies showing rapid evolution, like one from decades ago that focused on Galapagos finches. There has always been rapid evolution of species, he said, but it could be happening more often because of a changing climate. “Conditions are changing so fast there’s a mismatch between organisms and their environment,” he said.

The study also shows how climate change can either quickly drive genetic changes in species or imperil other species that can’t evolve as quickly, he said. He added that fragmentation of plant habitats resulting from greater urbanization could impair evolution, since smaller plant populations have less of the genetic variation that allows hardier members of the species to emerge.

“Even though we can see some evolution, even rapid evolution, we need to aim for greater sustainability and lower environmental impact to protect species from extinction,” he said.