skip to main content
Return to Fordham University
You are at:Home»Science»Calder Center Symposium Features Young Citizen Scientists
Joshleen Cruzado, a senior at Young Women’s Leadership School in East Harlem, was one of the first high school students to participate in the Calder Research Symposium.
In a keynote address at the annual Calder Summer Undergraduate Research Symposium, Jessica Schuler of New York Botanical Garden (NYBG) stressed the need for engaging the general public as citizen scientists—volunteers trained to gather data for scientific research. 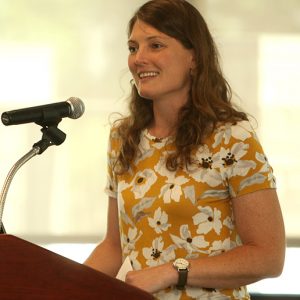 “It’s up to us to train everybody about ecology, it doesn’t have to be to understand research protocols like you [biologists]do, but just share your experiences out in the field,” said Schuler, who is director of the botanical garden’s Thain Family Forest.

Nevertheless, Schuler said that in addition to sharing anecdotes with the general public, further engaging them through research holds the potential to transform the science and deepen awareness.

At the Thain Family Forest, volunteers have helped monitor and restore the forest, planting more than 34,000 native species. Tracking invasive species, as well as natives, involved measuring everything in the 50-acre forest that had grown a meter or higher, Schuler said. It was a herculean task that would’ve overwhelmed Schuler and her fulltime staff of two. But since 2008, NYBG engaged hundreds of students and volunteers—citizen scientists—to obtain data sets that helped map out that forest restoration.

Schuler said volunteers in the citizen science program help to document the timing of events in the forest across the seasons, which can reveal important trends. Tracking a tree from when it flowers to when it produces fruit to when its leaves turn color in the fall can help produce a long-term data set that could provide indicators of global warming, for example. She stressed that the garden employs quality control to maintain “the validity of data science, in terms of phenology.”

“Once you get in there to establish these programs, they run and run well,” she said, adding that seasoned volunteers can train others. Plus, practicing science as a volunteer fosters awareness, she said.

Tom Daniels, Ph.D., director of the Calder Center, agreed. “We need a more scientifically literate society and citizen scientists are the way to go,” he said. 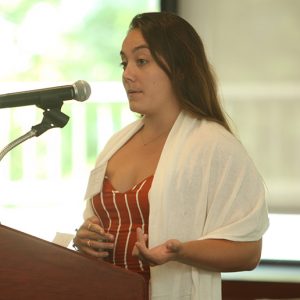 For the past 20 years, Calder’s Undergraduate Research Program has allowed Fordham students to become citizen scientists themselves as they delved deep into the forests, rivers, lakes, city streets, and labs, in search of answers to research questions. This anniversary year was no different. Ten students took a data-driven look at the metropolitan region’s ecology this summer through a variety of experiments. From tying the roots of pediatric asthma in the Bronx to traffic data, to examining the effects of urbanization on blood glucose in pigeons, to observing seasonal patterns of photosynthesis on American beachgrass, the day’s subjects were as diverse as the city itself.

Though the primary focus of the symposium was on the hard work conducted by undergraduates, this year a group of budding high school scientists were at the symposium to show the results of their Calder Center research for the first time. Their work underscored the focus of Schuler’s talk.

“Think globally; act locally,” she said. “Connecting students to nature teaches them that their data can make a difference and change policy.”

The idea to invite New York City high school students to participate in the Calder-sponsored program came from Patricio Meneses, Ph.D., associate professor of biology. After a meeting in May with Chief Diversity Officer Rafael Zapata, Meneses ran into Renaldo Alba on campus. Alba is the associate director of the University’s CSTEP/STEP program, which prepares minority students for careers in science, engineering, technology, and licensed professions. Within hours, Meneses secured financial sponsorship from Zapata’s office and recruited talented high school students from Alba’s program.

“We wanted to make sure the students would be paid for their research, so they didn’t have to take another summer job,” he said.

Kelechi D. Nnaji, a senior at Mount Vernon High School, researched how plants can be natural filters for polluted water. He’s been in the STEP program since seventh grade. The sumertime program brings students in grades 7 through 12 to Fordham for five weeks of college prep classes. He said the program familiarized him with the college campuses and helped him mature a bit faster than some of his peers.

“I’ve essentially experienced college life and even though I don’t go to the best school I do get excellent grades and I do really great things,” he said. “This is like my millionth time on campus.”

For Joshleen Cruzado, a senior at Young Women’s Leadership School in East Harlem, the program presented a rare opportunity.

“I’ve done research before but it was a retrospective, because the data was already there, but now I’m ready to do data myself,” she said beaming before her poster analyzing proteins of the HPV virus. “For women and minorities like me, we don’t get the opportunities to do these things, but because of this program we got that opportunity.”

Teen Scientists from the STEP Program