If you want to know how healthy a body of water is, there’s no better bellwether than algae, the vast array of photosynthetic organisms that can range from microscopic to hundreds of feet long.

This summer, Fordham’s Louis Calder Biological Field Station hosted Freshwater Algae Identification, the first of a series of field-based courses that have been planned to take advantage of the facilities spread across the center’s 113-acre grounds.

The graduate course, which lasted two weeks, was taught by John Wehr, PhD, professor of biological sciences. The students, who hailed from as far away as Australia and Colorado, were a mix of water quality managers and graduate students who work in aquatic ecosystems and rely on algae species as the figurative canary in the coal mine. One student consults for property owners who use their lakes for recreational and aesthetic purposes.

“The students are concerned about identification from the point of view of toxins that some algal species produce,” said Wehr. “There are good and not so good outcomes of having algae in fresh water systems. Accurate identification of these organisms is critical in order to do a good job.”

The center hosts students and researchers interested in a variety of biological sciences, but this field-based course was a new approach. For two weeks, students collected specimens from Calder Lake and nearby locations in Connecticut and Westchester and Rockland Counties. They then examined them in a newly renovated classroom on the second floor of the century-old boathouse, perched alongside Calder Lake. 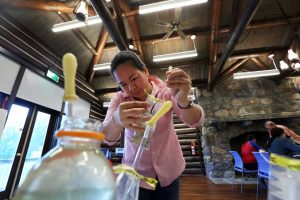 Although Calder Lake not very large, Wehr said it features a variety of “microhabitats.” As such, it is host to nearly 1,000 different species of algae. Some species only appear in the early spring, and to prepare for the course Wehr collected them right after the ice on the surface of the lake melted. The goal was to give the students the broadest diversity of organisms possible.

Whether focused on amphibian biology, birdcalls, plant identification, or another topic, field courses work best when done in an intensive environment, said Wehr. The field course is a model that other field stations around the country follow, and one that he hopes will take off at Calder, too.

“We wanted to try to make a bigger presence for the field station as an educational resource for the wider region,” he said. “We’re hoping that this is going to make for a model so that we can host courses on other topics.”