In early March, Ar Kornreich was a whirlwind of preparation.

Ph.D. student Medha Pandey holds a red-bellied woodpecker that was caught and released as part of her research into pathogens passed from birds to ticks. Photo courtesy of Medha Pandey
After six months of classes, Kornreich was almost ready to begin fieldwork for a biology Ph.D. dissertation. From late May to early August, Kornreich would roam the 113 acres of Fordham’s Louis Calder Center with a cutting-edge Vesper GPS logger, trapping, banding, and tracking gray catbirds. Her goal was to determine whether catbirds use mimicry of each other’s songs—also called song matching—as a way to regulate territorial boundaries. Having assisted a classmate, Medha Pandey, conduct similar work the summer before, Kornreich, who uses they/their/them pronouns, was super excited to do their own work. 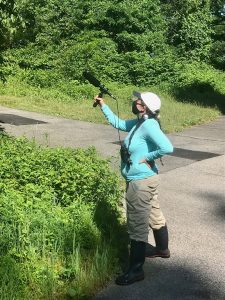 Ph.D. student Ar Kornreich recording the songs of catbirds on the grounds of the Calder Center. Photo courtesy of Ar Kornreich

Suffice to say that after the COVID-19 closures, neither Kornreich nor Pandey, who are studying under the guidance of J. Alan Clark, Ph.D., got the summer of fieldwork that they expected. But thanks to extensive planning and a little bit of ingenuity, both graduate students were able to use what was arguably the safest research facility at the University’s disposal—the woods—to complete crucial data collection.

Clark, an associate professor of biological sciences who specializes in birds, said he was determined to help them salvage the field season, having experienced failed ones twice himself while working on his Ph.D. He credited the center’s director Tom Daniels, Ph.D., and assistant director Alyssa Perrone, with making it possible.

“To lose an entire field season is heartbreaking,” he said. “But by working carefully with the Calder staff, they were able to keep moving forward. They were very fortunate; both of them had highly successful summers, and they were able to do it safely.”

For Kornreich, that meant several changes. Because equipment bottlenecks made the Vesper GPS unavailable, they had to use an old-fashioned boom mic and GPS unit to track catbirds, which produce a cat-like mew call that is sometimes mistaken for mockingbirds. Kornreich also had to wait until June—two weeks later than planned—to begin work, when the University granted permission to go ahead. Even then, Kornreich was limited exclusively to outdoor activity—only essential Calder staff was allowed to enter buildings there.

Staking Out A Vocal Visitor 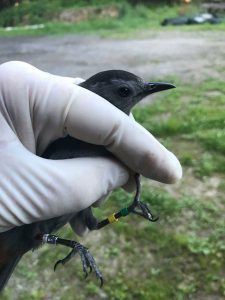 A gray catbird that was captured and banded as part of Kornreich’s study into the birds’ song patterns. Photo courtesy of Ar Kornreich

Once safety protocols were established, Kornreich was able to roam the woods, trapping the birds in nets, banding them, and noting where they’d established distinct territories. In two months, they trapped and tracked 45 birds in six distinct areas.

“If we have two territories very close together, or even if we catch them singing to each other back and forth, we can compare the songs from catbirds whose territories are near each other and see to what degree they match,” they said.

“Based on behavioral observations of how they interact when those songs match, we can draw conclusions about how they’re using that mimicry.”

Kornreich had to forego training on trapping and banding birds, due to social distancing requirements. Even so, they said they still learned a lot on their own about recording in the field and has a better sense of how the birds behave now.

“It’s the sort of quick thinking and adaptation that scientists had to do when COVID hit. A lot of people’s field seasons got straight-up canceled, and even though mine wasn’t, it did necessitate a lot of creative thinking to make the season happen. Dr. Clark deserves a lot of credit for it,” they said. 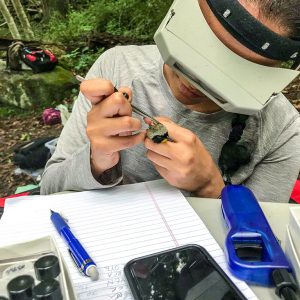 You Trap Mine, I’ll Record Yours

Pandey and Kornreich contributed to each other’s success. Pandey’s fieldwork, which began last summer when she was a master’s student, also involves trapping birds, but Pandey is less interested in the type of bird she catches, and more interested in potential passengers—tick larvae capable of picking up pathogens from bird hosts.

The peak of her season, in August, was at the tail end of Kornreich’s season, so after she helped capture and band Kornreich’s catbirds, Kornreich paid back the favor by recording data on the birds and ticks Pandey caught. That was valuable because, in the end, Pandey caught and released 180 birds and collected 56 blood samples and 250 larvae.

“When most tick larvae are born, they’re pathogen-free, and if they come off the bird infected, it’s most likely the bird is the source of the infection,” she said.

“That’s what I want to confirm, both by testing the ticks and by sampling the blood from the birds.” 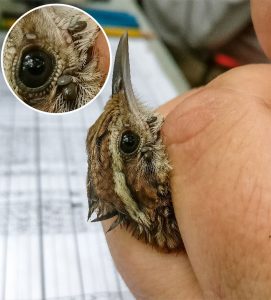 A closeup of a Carolina wren with tick larvae near its eyes. Photo courtesy of Medha Pandey

Because there were days when the number of birds caught in their nets reached the double digits, Pandey also relied on both an assistant and a volunteer from the Bedford Audubon Society. Even with COVID-19 related restrictions in place, she had more success than last year, when she caught 395 birds, but only collected 50 blood samples and 164 larvae.

“The first two or three times we went out in the field, it was like ‘OK, are we getting too many birds to handle in our social distanced setup? How do we do this safely and effectively for ourselves and for the birds as well?’ We were able to work those kinks out though,” she said.

Depending on the feedback she receives from her dissertation committee, she may have enough samples to move on to lab work.

Grateful For The Opportunity 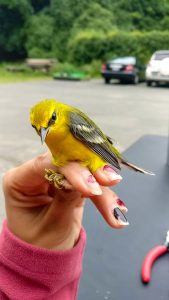 Both Kornreich and Pandey said the ability to continue their studies greatly helped them weather the challenges of the pandemic.

“I loved helping Medha in 2019. It had been the highlight of my year, and I was really depressed at the idea that I might not be able to do it myself this year,” said Kornreich, who hopes to return to the woods in 2021 with equipment that allows her to play songs back to catbirds.

“I tried to stay optimistic and focus on what I could do, and what options and equipment I did have, rather than what I no longer could do. Trying to balance the craziness of navigating that new reality, navigating your own panic, navigating the panic of everyone around you, and still trying to think straight about science, can be difficult. But the bottom line is, it did work out.”