skip to main content
Return to Fordham University
You are at:Home»Science»Calder Center Celebrates 50 Years of Research
Fordham president Joseph M. McShane, S.J. thanks Peter Calder at the 50th anniversary of the center named for Calder’s grandfather.
Fordham marked the golden anniversary of the Louis Calder Center on June 14 with reflections on the history of the113-acre facility and a new commitment to strengthen its role in wildlife conservation.

At a luncheon held on the front porch of Calder Hall, the Gatsby-esque mansion perched on a 680-foot-high bluff just 25 miles north of New York City, students, faculty, and staff took stock of all the scientific research that has been conducted at the center since its founding in August, 1967. The afternoon celebration also honored the legacy of the Calder family, which was represented by Louis Calder’s grandson Peter Calder.

A Shared Commitment to the Natural World 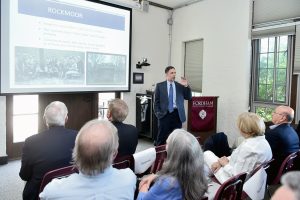 The Calder property has always been a site for conservation, director Tom Daniels said.

A year before the center was established, the estate of paper magnate Louis Calder deeded the property—then known as Rockmoor Estate—to Fordham, with the understanding that the “premises will be used primarily as a reserve for the study of the natural environment and other fields of ecology.”

Speaking to the group of about 50 faculty members, students and staff, Joseph M. McShane, S.J., president of Fordham, said the research conducted at Calder—more than 200 Ph.D.s and master’s degrees have been awarded to students whose work was based there—is crucial to solving some of the most vexing problems of our time, such as climate change.

Related: A Day In the Wildlife: Amid the Ecosystems and Ecologist at the Calder Center 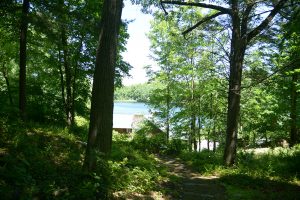 A footpath leads down through the woods to the Lake House, which now houses skiffs on the ground floor and a classroom on the second floor.

He noted that Calder staff and students are following in the footsteps of early Jesuits who were committed to learning about the natural world, and who reported their findings back to the Superior General of the Society of Jesus. One of them, Georg Joseph Kamel, S.J., a 17th-century pharmacist who made medicines from plants, is credited as the namesake of the Camellia flower, he said.

“Everything flowed to Rome, and on the basis of this, younger Jesuits were trained using what they had learned. So, we have in our blood this interest and delight in everything in the world, especially the world of nature,” he said. 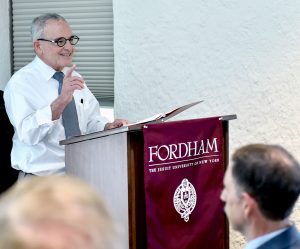 Fordham Provost Stephen Freedman, a professor of ecology and evolutionary biology, noted that 200 PhDs and masters degrees have been completed by students based at Calder.

“Every day that Calder is active, open, and making discoveries, you deepen our University’s connection to these Jesuit roots.”

Father McShane cited Pope Francis’ 2015 encyclical on the environment and sustainable development, Laudato Si, as a present-day manifestation of that commitment to the natural world.

‘A Conservationist of His Day’ 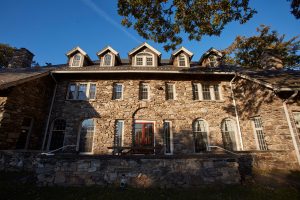 The celebration was held at Calder Hall, a mansion whose rooms have been transformed into research labs and offices.

In a presentation about the history of the property, Tom Daniels, Ph.D., director of the Calder Center, described Louis Calder’s career and the way he used the estate. He displayed several photographs, including one image of Calder and a hunting party.

“Hunting and fishing were very important to him. He was a conservationist of his day. We don’t necessarily think of conservation now as hunting and fishing, particularly in the Northeast, but sportsman, hunters, and fishermen had great respect for the land and the resources. It showed in his work at [paper company]Perkins Goodwin, and it showed in his handling of this property,” he said. 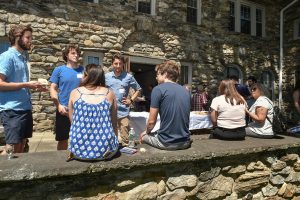 Daniels also announced that the Calder Foundation had just contributed $210,000 toward an endowment that supports the Calder Summer Undergraduate (CSUR) program, which hosts undergraduate students doing research over the summer. The program, which is celebrating its 20th anniversary, currently hosts five students; the Calder gift will enable it to host two more.

Father McShane dubbed the Calders “exemplary companions in mission and colleagues in service.”

Addressing Peter Calder, he said, “Your family and the foundation gave us all of this, and you gave with it a mission to learn, to preserve, and to be evangelical about ecology preservation. We could never adequately thank you and your entire family enough.”

In acknowledging Father McShane’s thanks, Calder stood up from his front row seat, turned around and delivered impromptu remarks to the assembled group.

“The family appreciates all of your comments, but it’s really Fordham and its people that have made this a success. And I thank you for that,” he said. 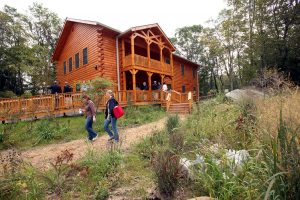 The residential cabin, which opened in 2011.

A running theme of the day was how much has changed since 1967. The aviary, outdoor swimming pool and “toboggan run” are long gone. Labs and classrooms have been constructed in Calder Hall and the Lake House, and a residence hall and a new greenhouse have been built in the last five years.

A primary driver behind much of that change was John Wehr, Ph.D., professor of biological sciences, who was director of the center for 30 years before stepping aside in 2014. He was honored at the presentation for all his contributions, including founding the CSUR program 20 years ago.

Daniels summed up the three main tenets of the center’s mission: understand the world we live in, show people nature so that they ascribe value to it; and make new scientists.

“We still have much to do. We have real science we have to do,” he said. “With the people we currently have at the EPA, environmental stewardship has never been more important.” 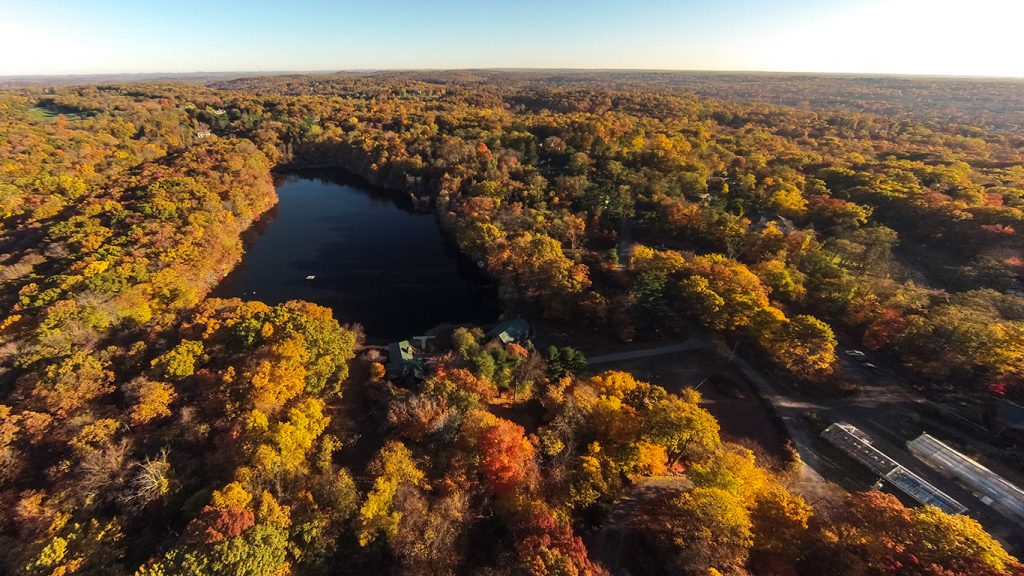 An aerial view of the Calder Center, with Calder lake in the background.