skip to main content
Return to Fordham University
You are at:Home»Science»Biology Grad Student Lauded for Research into Brain Chemistry 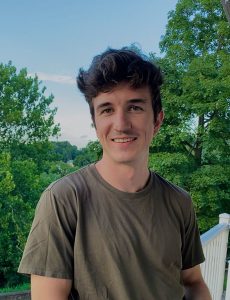 Devin Rocks is still at least a year away from earning his Ph.D. in biology. But the Rockaway Park, Queens, native is already making a splash in the academic world, thanks to his work examining the role that fluctuating sex hormones can have on mental disorders such as anxiety and depression.

This spring, the Organization for the Study of Sex Differences honored Rocks with the Elizabeth Young New Investigator Award, and the Society for Behavioral Neuroendocrinology awarded him its Welcome Initiative Award. In January, the Society for Neuroscience bestowed upon him the Trainee Professional Development Award.

The awards recognize both the promise that Rocks has as a scientist and the work he’s conducted at Fordham under the guidance of Marija Kundakovic, Ph.D., assistant professor of biology. Kundakovic’s lab has been focused on an acute problem: Women are twice as likely to have anxiety and depression than men, but little research has been done on the molecular level to figure out why—until now. In January, Kundakovic was awarded nearly $1.9 million in grant funding from the National Institute of Mental Health for her research.

Rocks, who graduated from Fordham College Rose Hill in 2017 with a B.S. in integrative neuroscience and is on track to earn a Ph.D. in biological sciences in 2022, has been a part of the research from the beginning. He was one of five co-authors of a 2019 paper published in the prestigious journal Nature Communications that showed how a microscopic cell component called chromatin changes its shape during the mouse ovarian cycle—especially when females experience a change in estrogen. Because the changes occur inside the brain area implicated in anxiety and depression, it may affect women’s vulnerability to an increased risk for these disorders.

“The chromatin is basically the packaging material of the DNA. The chromatin can either be open, which allows the genes to be turned on, or it can be closed, in which case the genes are turned off,” he said.

“The studies showed that, over the rodent estrous cycle, which is the rodent equivalent of the menstrual cycle, the fluctuating sex hormones are affecting whether this chromatin is open or closed and affecting certain genes.”

It’s not known exactly how the opening or closing of chromatin causes depression or anxiety, but connecting the two events together is an important step in the research.

Since that 2019 paper was published, Rocks has been conducting follow-up research that involves introducing a gene known as Egr1 into the brains of laboratory mice to mimic the changes that normally only happen during the estrous cycle. The results will be published as part of his dissertation.

“We can give mice extra copies of this gene in the brain region that we study, the ventral hippocampus, and this can mimic the effect you’d see from the fluctuating hormones. This gene seems to be playing an important master regulatory role,” he said.

Kundakovic, who joined Fordham in 2015 and began working with Rocks when he was in his junior undergraduate year, said “functional” studies that rely on live animals are vital to verifying studies that use computational analysis to predict whether one change (a change in estrogen) is connected to something happening in the brain (a change in chromatin structure) and behavior.

“You can do a big data-computational type analysis, and say, ‘Give me the predicted regulator of these chromatin changes that we are seeing.’ [In 2019], we did that, and we found a really good candidate in Egr1,” she said.

“What Devin did was he took the candidate that we have, and he was able to do a manipulation of the animals in which he could functionally relate the changes and say, ‘This is the regulator of the behavior.’”

Rocks still has more research to do. Now that he knows that introducing Egr1 into mouse brains can change their behavior, he’s planning to conduct experiments that show exactly how Egr1 affects chromatin.

“We want to see which changes in chromatin and gene expression that we see happening in normal animals over their estrous cycle are being regulated directly by Egr1,” said Rocks, who also teaches techniques in molecular biology to first-year graduate students.

The awards he received are gratifying, he said, given that he’s still completing his education.

“It’s an indication that the community is welcoming me as someone who will contribute to the field in the future and will continue to grow as a scientist, and so I’m really grateful for all of them,” he said.

The most challenging aspect of the research has been utilizing the full spectrum of research techniques required.

“A lot of labs will just do one of the techniques we do, like the genome-wide experiments. Learning how to do them and analyze all that data that comes out of it using bioinformatics analysis, and then also learning how to do animal surgeries—we combine so many different disciplines and techniques,” he said.

“It’s definitely been a challenge to keep up with all of that. It’s also really exciting though. Learning new things is one of my favorite parts of the job.”

Kundakovic was quick to note that when it was announced that Rocks had won the Elizabeth Young New Investigator Award, he was introduced as a “future leader in the field.”

“As someone who’s been working with him for the past five years, since he was an undergraduate, it’s really been my privilege to watch him grow as a person and a scientist,” she said.

“His dedication to his work, his passion; it’s just paid off really well. I think he’s on a really good path.”