Talk to Berish Rubin about his research and it isn’t long before he brings up the children. Beaming and healthy, they gaze out from the photographs lining one wall of his laboratory at the Rose Hill campus. Rubin proudly shows a humorous video one of them created. Another child, he says, is a whiz at solving puzzles.

“These kids are extremely talented,” says Rubin, PhD, a professor in the Department of Biological Sciences. “It’s just amazing.”

Indeed. If not for therapies Rubin helped develop, they might be virtually catatonic. 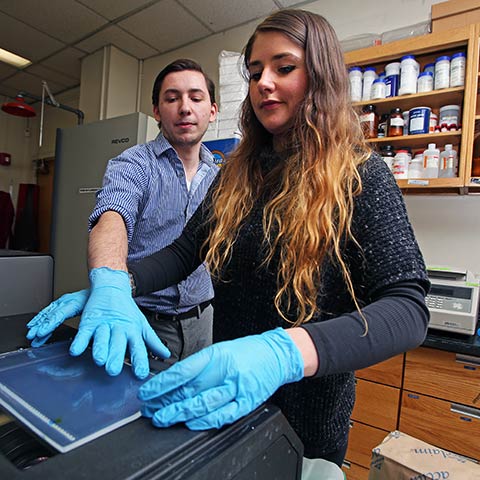 Anthony Evans and Katherine Reid work with a transilluminator to examine cells.
(Photo by Bruce Gilbert)

Rubin studies familial dysautonomia, or FD, a rare, life-shortening genetic disorder with symptoms so agonizing that those born with it often need to be heavily sedated. Since 2000, he and his colleagues have developed natural, over-the-counter treatments for its most debilitating symptoms, allowing hundreds of children to reclaim their lives without using costly drugs and suffering the side effects.

“They’re just brilliant, and they used to be entrapped in bodies that required that they be extremely sedated,” he said. “They were a shadow of what they are now.”

This success, however, poses a new challenge: addressing the osteoporosis that FD patients tend to develop at a young age. It’s a problem that drew attention when more FD patients started living longer, Rubin said: “Nobody worried about this, because most of the kids [with FD]didn’t make it out of their teenage years.”

His research is funded in part by a $48,000 grant secured by New York City Council member Andrew Cohen, the latest of many city grants for Rubin’s research since 2003.

Rubin and Anderson are taking the same type of approach to osteoporosis, looking for “nutraceutical” therapies to prevent the condition in anyone, not just those with FD. Rubin noted that current osteoporosis drugs are unsuited to the long-term treatment a youthful FD patient would need.

“It’s clear that diet plays a very strong role in the development of osteoporosis,” said Rubin, citing studies that show the difference that fruits and vegetables can make.

Comparisons by country also make the point: “When you look at a map of the world and you look at the incidence of osteoporosis, you can find in one country the incidence is five times higher than the country next to it. And you know all countries have different diets.”

At the same time, he said, “there’s a lack of understanding of which dietary components are having the effect and how to harness that information to help the population, and that’s really what we’re trying to do.”

He and his graduate students are testing hundreds of fruit, vegetable, and plant extracts in their laboratory at Larkin Hall, looking for those that might slow down the cells that weaken and degrade bone.

“We definitely have some that look promising,” he said.

Working on FD, he and his team have picked up hints of possible “nutraceutical” cures for a number of conditions: Fanconi anemia, spinal muscular atrophy, and Niemann-Pick disease and mucolipidosis, both of which are metabolic disorders.

One of Rubin’s graduate students, Faaria Fasih-Ahmad, is investigating beta thalassemia, a blood disorder related to FD that’s found in the Palestinian population.

“There’s a whole host of treatable genetic diseases out there,” Rubin said. With enough time and money, he said, “we could do a lot.”