Working with chemistry professor Ipsita Banerjee, PhD, Fordham undergraduates are learning how 3D printers can be used to make replacement organs for people afflicted with osteoarthritis, cancer, or other conditions.

Along the way, they’re also learning what it’s like to be a research scientist: the long hours in the lab, the painstaking analysis, the late nights spent poring over data—and the joys of digging into fascinating scientific questions.

“I wouldn’t look at it as necessarily work,” said biology major Steve Romanelli.

That’s a typical outlook among students who work with Banerjee, whose one-on-one attention and high expectations often propel students into careers of scientific inquiry.

“Basically, I train them as scientists” by offering graduate-level tutelage, which leads many of them to fall in love with research and pursue it at universities like Oxford, Cambridge, and UCLA upon graduating, she said. 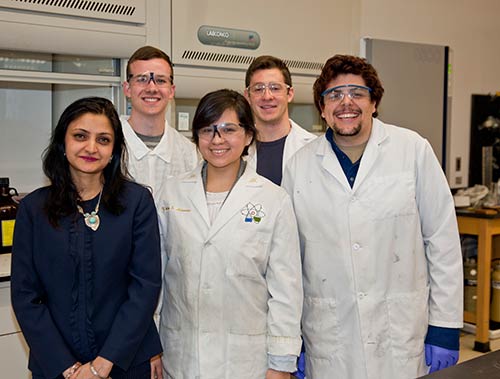 Banerjee, left, with her team. From L to R are Grant Knoll, Yoliem Miranda, Steve Romanelli, and Anthony Santora. (Photo by Nile Clarke)

It helps, of course, to have engrossing subjects to explore. People have used 3D printing to turn three-dimensional digital images into all kinds of objects, ranging from food to firearms, and according to Banerjee it’s revolutionizing the field of tissue regeneration.

Instead of examining cells two-dimensionally, under glass on a microscope, scientists can use 3D printers to create tiny models, or scaffolds, in the shape of an organ. By filling these scaffolds with cells, they get a clearer idea of how the cells function when they’re bunched together in the organ itself.

This knowledge can then be used to fashion small replicas of organs and tissues that, when implanted, grow to their full size naturally, just as the original ones did, Banerjee said. The patient’s own cells can be used so the body’s immune system isn’t triggered, and the scaffold biodegrades as the organ grows.

But more research is needed before this technique can be used widely, and inexpensively, with minimal side effects, Banerjee said.

Her team concentrates on regenerating bone tissue and cartilage, but also skin tissue and the cornea. Banerjee’s students work on synthesizing the scaffolds and making sure they have the right properties.

Made from proteins, minerals, collagen, or other materials, depending on the type of organ being studied, the scaffolds have to be precisely designed at the nanoscale. If the composition isn’t right they might disintegrate too quickly, soak up water, attract bacteria, or trip the body’s immune defenses.

Getting the shape right is also important, especially for a cornea scaffold, which has to have the correct refractive index. Also, of course, it has to be transparent.

“That’s a very interesting challenge, but it’s fun also,” Banerjee said. “All of these are equally challenging, but each one has its own nuances that you can work with.”

Over the years, many of Banerjee’s students—Romanelli included—have been published in professional journals and presented their research at professional conferences, where they’re often the only undergraduates on the program. Their conference presentations have won several awards.

Banerjee has seen many pre-med students change their plans and pursue research instead after learning what it’s like. Romanelli, for instance, wanted to be an orthopedic surgeon when he started working with Banerjee in his sophomore year. But now, as he prepares to begin senior year, he hopes to eventually earn a doctorate in biomedical engineering instead.

Coming to the lab is “kind of a stress relief, almost,” he said. In Banerjee’s words, “It becomes a part of who you are, after a point.  With them, it’s like, ‘This is what we do.’”