skip to main content
Return to Fordham University
You are at:Home»Science»Anthropology Professor Tracks Critically Endangered Monkeys in Africa
A white-naped mangabey as seen in a video screenshot captured by a team of scientists, including Fordham’s Reiko Matsuda Goodwin.
The Comoé National Park, a 4,400-square mile UNESCO World Heritage Site in northeastern Côte d’Ivoire, is one of West Africa’s most important havens for endangered flora and fauna. Among the animals that call it home are the critically endangered western chimpanzee and the vulnerable African elephant.

The park is also home to the white-naped mangabey (Cercocebus lunulatus), a slender, long-limbed primate that was recently elevated to be its own distinct species. And although it is critically endangered, it is doing better than the white-thighed colobus (Colobus vellerosus), which is also a critically endangered species and extremely rare in the park.

Reiko Matsuda Goodwin, Ph.D., a primate conservationist and adjunct professor of anthropology at Fordham, wants to know why.

The Comoé National Park is in one of the most remote areas of West Africa.

“In other forests, large-bodied mangabeys are being hunted out. They are the favored food that the hunters go after, so they’re going extinct locally. Here, they’ve somehow managed to survive. What makes them abundant? We don’t have an answer yet,” she said.

In December, Matsuda Goodwin traveled to Comoé along with Sery Gonedelé Bi, Ph.D., assistant professor at Université Félix Houphouët-Boigny in Abidjan, Côte d’Ivoire, and Alec Baxt, a New York-based arborist, to conduct a systematic study on the viable population of the white-naped mangabey and the white-thighed colobus. By counting the number of individuals seen on camera and conducting surveys, researchers can estimate the size of their populations in the park.

Working with Juan Lapuente, the head of the Comoé Chimpanzee Conservation Project, the team installed 24 video cameras in the tree canopy at select locations in Comoé. Although Lapuente, who is a Ph.D. student at Universität Würzburg, Germany, has already learned a great deal about the mangabeys from cameras he installed at ground level, little was known about their life in the treetops. 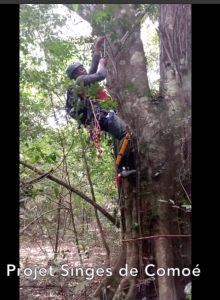 The team taught two local assistants how to use professional climbing equipment so they can safely service the cameras.

“Mangabeys really have adapted to both terrestrial and arboreal habitats. That may be one reason why they are the first species in mixed-species situations that give a loud call whenever they see humans approaching. They do it before any other primate species. They are really good at being vigilant against predators,” said Matsuda Goodwin.

Underscoring how little is known about white-naped mangabeys, it was just two and a half years ago that researchers elevated them to the level of full species, distinct from the sooty mangabey (Cercocebus atys), which they’d previously been considered a part of. Since the cameras have been installed, footage has captured them carefully choosing ripe fruit, discarding fruit skins, sniffing scents that other animals appear to have marked, and engaging in various vocal behavior such as “contact calls,” “dispute calls,” and “loud calls” The latter call is called the “Chaku” call and is given by adult males. These calls sound similar but are different from those given by sooty mangabeys.

“When the white-naped mangabey was elevated to its own species, we realized that its populations were so scattered. There are only two populations that we know of in Ghana, and there are only maybe two or three populations in Côte d’Ivoire. The Comoé population is now known as the most important one,” Matsuda Goodwin said. 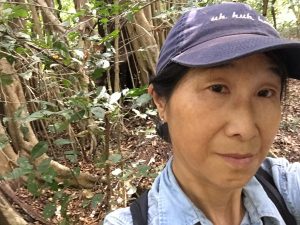 In addition to Côte d’Ivoire, Matsuda-Goodwin has conducted reasearch in Benin, Togo and Nigeria.

Matsuda Goodwin, who teaches courses such as Primate Ecology and Conservation, Introduction to Physical Anthropology, and Introduction to Human Variation at Fordham, is planning to return to Côte d’Ivoire in May to resume the field-work, which is supported by the Primate Partnership Fund, Primate Conservation, Inc., the Pro Natura Foundation Japan, Sherrill, Inc., and an anonymous donor.

As part of their visit, Baxt taught two local assistants from the Côte d’Ivoire village of Kakpin how to use professional climbing equipment so they can safely service the cameras when they need new batteries or memory cards.

“Most of the time, the canopy is inaccessible to researchers, so the fact that they’re able to now climb up using secure, modern, nondestructive equipment is really opening up a new window for all sorts of different kinds of canopy research,” Matsuda Goodwin said.