skip to main content
Return to Fordham University
You are at:Home»Science»Anthropology Professor Discovers Possible Hybrid Monkey
Video stills and images of a putative white-naped magabey and olive baboon hybrid
Images and video courtesy of Reiko Matsuda Goodwin
Reiko Matsuda Goodwin, Ph.D., is accustomed to observing the slender, long-limbed, and endangered white-naped mangabey (Cercocebus lunulatus), swinging in African forests alongside the likes of the olive baboon (Papio Anubis) and other animals.

But three years ago, during a visit to Côte d’Ivoire’s Comoé National Park, Matsuda Goodwin, a primate conservationist and adjunct professor of anthropology at Fordham, discovered what she is almost certain is the first sighting in the wild of a monkey that is a descendent of both a mangabey and a baboon. This summer, she’ll continue her study of the hybrid “Mangaboons,” with an eye toward saving them.

One sighting is not enough to make a case for a new kind of monkey. But two more sightings by Matsuda Goodwin last year, which were documented via photo and video, convinced her that at least one hybrid monkey is living in the 4,400-square-mile park, which is a UNESCO World Heritage Site.

In April, she published her most recent findings on all the sightings in the paper “Putative white-naped mangabey (Cercocebus lunulatus) × olive baboon (Papio anubis) hybrids from Comoé National Park in Côte d’Ivoire.” She is the lead author of the paper, which appeared in the journal Folia Primatologica. 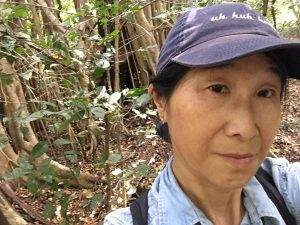 Since the white-naped mangabey is critically endangered, the presence of a hybrid of it adds a wrinkle to the effort to preserve it, Goodwin said.

“It challenges conservation practitioners. There are no countries in the world that say a hybrid has to be protected. Hybrids have a unique genome, and from my point of view, I think they deserve protection,” said Goodwin.

“But we can’t put them on the endangered species list, because they don’t really fit in. People might say they’re not pure, so they don’t need to be protected.”

Matsuda Goodwin still needs to conduct a genetic analysis of the monkeys’ scat, or feces, before making a definitive conclusion and will be teaming up with a geneticist from NYU to test samples that she is searching for this summer. Until then, she is referring to it as “putative,” as it is only presumed to be a hybrid. But evidence from four photos that she took in June and video taken from remote canopy cameras in January and May 2021 makes a strong case for the hybrid theory.

“The face is so unique. It doesn’t look like a baboon or a mangabey. It’s very peculiar,” she said.

In the videos, the putative hybrid, which may be the same one from 2019 or may be a different one, also exhibited behaviors that lend credence to the hybrid hypothesis. Its tail droops downward like a baboon, not up in an arc over its back like a mangabey. It is also seemingly less agile than a mangabey.

Mangabey baboon hybrids are not unprecedented, as they have been born in captivity. When they are born in the wild though, it can either be the result of random mating of species, which is known as a stochastic phenomenon, or it can be a sign of an ecosystem under stress. Baboons, for instance, are plentiful in other parts of Africa, but in the Comoé National Park, their numbers are worrisome.

“If there are enough mates of the same species, why would one mate with a different species? From a conservation point of view, it’s important to study them.”