The National Science Foundation (NSF) awarded a $113,000 grant for the acquisition of a high-resolution atomic force microscope for interdisciplinary nanoscience research. With chemistry professor Ipsita A. Banerjee, PhD, as principal investigator, a group of faculty from the departments of biological sciences, physics and engineering, and chemistry cooperated on the grant to obtain equipment which they will share.

“This award is really exciting, especially since the NSF’s Major Research Instrumentation Program only funds about one-fourth of the applications it receives, and this is the second MRI award we’ve gotten in two years.” said Kris Wolff, director of the Office of Sponsored Programs. The 2015 grant, for a liquid-handling robot, went to Jason Munshi-South’s lab in the biological sciences department.

The Russo family has provided more than $180,000 in funding towards purchasing a scanning electron microscope (SEM). Robert D. Russo, MD, FCRH ’69, is a member of the University’s President’s Council and Fordham’s Science Council, which aims to promote science, technology, engineering, and mathematics in part by modernizing the University’s technological capabilities. 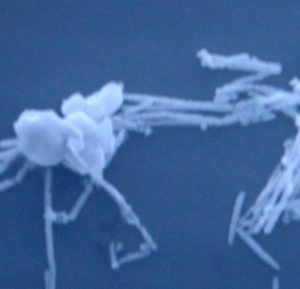 Silver strands on a solar cell, magnified at 50 nanometers.

“A donation like this has a ripple effect,” said Robert Beer, PhD, chair of the chemistry department. “We were able to get the instrument, which attracted a new faculty member, and it shows that we’re an institution that is serious about upgrading technology and research.”

In addition, by trading in an older instrument, the University received a donation from the pharmaceutical company Roche and a $40,000 grant from TA Instruments, and was able to purchase a thermal gravimetric analyzer and rheometer. This summer the department also acquired an X-ray powder diffractometer at a cost of nearly $120,000.

The SEM uses electrons rather than visible light. As typical wavelengths of visible light are 400 to 800 nanometers, said Koenigsmann, light microscopes cannot perceive an object, for example, that is two nanometers. The electron microscope’s much smaller wavelengths allow it to perceive objects with diameters as small as one to two nanometers—equivalent to the diameter of double helix strand of DNA. 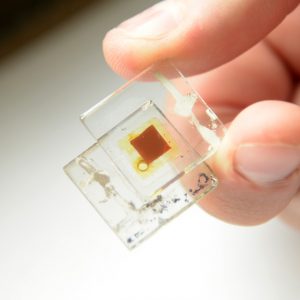 Students manufacture solar cells in Prof. Koenigsmann’s lab and analyze their properties with the new equipment.

The X-ray powder diffractometer looks at material composed of small crystallites. The instrument detects the material’s elements and how they are organized in the crystal structure.

“It’s a tremendously powerful instrument and it’s one of the essential characterization tools in chemistry,” said Koenigsmann.

He said that his lab is involved in a few projects to examine renewable energy technology. He is interested in increasing the cost-effectiveness and performance of solar cells and fuel cells in order to harness the energy of sunlight.

“In nanotechnology, synthesis is important,” he said. “But what’s equally important is being able to characterize the properties and be able figure out exactly what you have.”