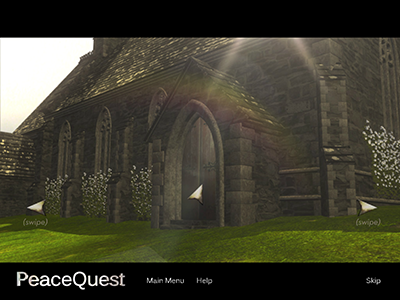 A screenshot from PeaceQuest, an app that evokes the immersive world of online games but is grounded in a type of prayer popularized by St. Ignatius Loyola in the 16th century.

Stephen Fichter, GSS ’03, the pastor of Sacred Heart Catholic Church in Haworth, N.J., was traveling a couple of years ago when he had an epiphany.
“I got on a plane and everyone around me had a Kindle, a laptop, or an iPad. They weren’t talking to each other; they weren’t interacting. They were all kind of lost in their little world.

“Wouldn’t it be great,” Father Fichter wondered, “if we could bring God into that digital world?” 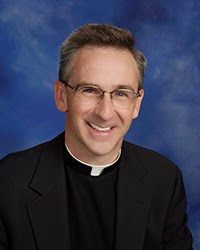 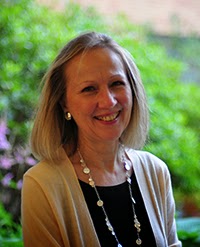 He shared his thoughts with Kathe Carson, MC ’75, a veteran producer of commercials for corporations and nonprofits, and the two decided to work together to create an app. After months of development—creating storyboards, working with 3-D animators and programmers, and testing early versions with focus groups—they launchedPeaceQuest.

The app, designed for iPad and iPhone users, offers a series of guided meditations in a setting based in part on Glendalough, a verdant valley in County Wicklow, Ireland.
“It’s a magical place,” said Father Fichter, who lived in Dublin for several years. “Green rolling hills, a lake, and an old monastery.”
The soundtrack features birdcalls, burbling waters, and the gentle tolling of a church bell. A monk named Anam Cara (“that’s Irish for soul friend”) greets digital travelers and leads them through a series of meditations.

Users can light virtual candles in a chapel while praying St. Anthony’s Litany of Loss; contemplate an image of Fra Angelico’s painting of the Annunciation; and take in an animated parable about the industrious sparrow, who, when faced with adversity, uses “every twig, every dried piece of grass” to make a new “safe haven.” 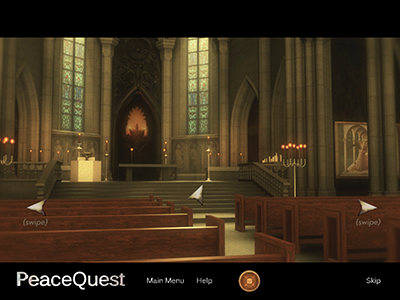 “We started with the theme of hope,” Carson said, “which is what this particular group of meditations is on.”

PeaceQuest evokes the immersive world of online games, but Father Fichter said it’s equally inspired by a type of prayer popularized by St. Ignatius Loyola in the 16th century. In his Spiritual Exercises, St. Ignatius wrote about “composition of place,” how to see “through the gaze of the imagination the material place where the object I want to contemplate is situated.”

Father Fichter, a sociologist and a research associate at Georgetown University’s Center for Applied Research in the Apostolate, has used “composition of place” in his homilies at Sacred Heart, encouraging parishioners to activate all of their senses and imagine themselves in a scene from Scripture.

“A lot of people resonated with it,” he said. “It helped them grow closer to Christ and deepen their faith.”

Technology, he believes, can facilitate that kind of connection for people who “have a longing for peace, but for whatever reason, organized religion doesn’t do it for them.”

Both Carson and Father Fichter said they hope to develop a version of the app for Android users and produce new meditations, including one on forgiveness and reconciliation, using the story of the prodigal son.

In the meantime, they’re planning to introduce a series of “Pearls,” animated videos that Father Ficther called “one-minute homilies—well crafted and well thought out—meant to give you a boost for the day.”

And they are encouraged by the feedback they’ve received.

James Martin, S.J., bestselling author of The Jesuit Guide to (Almost) Everything(HarperOne, 2010), has praised PeaceQuest, calling it “contemplation for even the busiest person.”

And Carson said some grandparents have told her how much they enjoy taking their grandkids through the meditations.

“Modern technology is bringing back something old, like sitting with your grandmother and praying,” she said. “That’s something we did not expect.”