skip to main content
Return to Fordham University
You are at:Home»Inside Fordham»About the Physics of Climate Change

Renowned climate scientist Michael E. Mann has been on the front lines of the climate change debate for years. He was part of a team who shared the 2007 the Nobel Peace prize for its work on what is commonly known as the “hockey stick” curve graph that shows how the temperature of the Earth has risen over the past 1,000 years with the increase of industrialization and use of fossil fuels.

But he is also a target of climate change deniers, having had his emails hacked by deniers and given to politicians in an attempt to discredit him and his research. 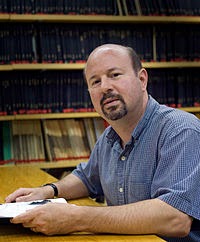 Mann, the director of the Earth System Science Center at Pennsylvania State University, has said that mankind is “wasting all this time” on the debate about whether climate change is real, rather than working to curb it.

Mann will speak at Fordham’s Rose Hill campus onWednesday, April 30 at 2:30 p.m. at Freeman Hall 103, along with physics professor Stephen Holler, Ph.D., on the basic underlying science of climate and climate change, including physically based models of the Earth’s climate. He will speak about an “Energy Balance Model” of the Earth’s radiative balance, which can be used to assess the historical changes in global temperature.

Mann is the author of two books: Dire Predictions: Understanding Global Warmingin 2008 and The Hockey Stick and the Climate Wars: Dispatches from the Front Lines, published in early 2012. He is also a co-founder and contributor to the climatology blog RealClimate.