skip to main content
Return to Fordham University
You are at:Home»Colleges and Schools»Fordham College at Lincoln Center»A Fascination with Plant Chemistry Leads Student to Planck Institute

Last spring, after four years of studying, striving, learning, and growing, Henrique Valim faced one the greatest challenges of his Fordham career: opening the e-mail from the Fulbright committee.

“It took me a couple of hours,” along with some prodding from his roommate, said Valim, FCLC ’14, before he could bring himself to read its contents—which turned out to be good news. “It felt like a big weight off my shoulders,” he said. 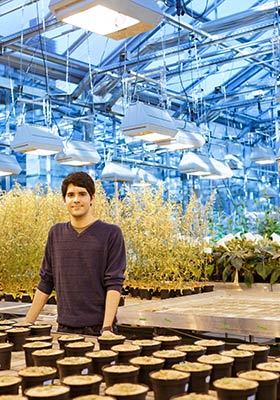 Such was his eagerness to deeply explore the aspects of plant genetics that had captured his interest. Today, as a Fulbright scholar, he’s studying in Germany at the Friedrich Schiller University of Jena and the nearby Max Planck Institute of Chemical Ecology, delving into the ways that plants manipulate their environment to fend off threats.

But his path to this highly focused research interest was circuitous, and took him into many diverse corners of the sciences during his time at Fordham.

A native of Brazil who moved to central Florida as a child, Valim was drawn to Fordham’s big-city setting, and found that attending lectures around town—sometimes to meet course requirements—stoked his interest in a research career. He originally planned to major in history or international studies, but it wasn’t long before he was turned on to science.

The following summer he brought Valim into his laboratory to take part in research into fruit fly genetics, and helped him land an internship at the IGC Gulbenkian Institute in Portugal the summer after that. There, too, he was studying Drosophila, but a lecture at the institute piqued his interest in a different area, one that would form the basis of his Fulbright application.

The topic was plants—specifically, he said, “all these things that plants do chemically … that people don’t usually really think about,” such as protecting themselves from insects by releasing chemicals that prompt other insects to attack the offending critters.

He prepared for his current research by adding a minor in bioinformatics to his major in natural science. In Germany he is studying a particularly resilient, but genetically diverse, brand of tobacco to help cultivate “smarter” crops. These could offer an alternative to crops designed to produce their own pesticides—a modification that Valim likened to “giving the plant a single hammer” that it keeps replicating.

“Insects very quickly learn to either avoid that hammer, or they basically learn to deal with that pretty quickly when it’s something that’s really putting a pressure on them,” he said.

The plants he’s studying, on the other hand, “have this ability to use a lot of different tools, and they know how to turn on and turn off things when it’s needed and it isn’t. And that’s the type of thing that we’re most interested in understanding.”

It’s a project that has relevance for protecting biodiversity as more food is produced to feed the world’s burgeoning population, he said. His enthusiasm for his work is apparent—in addition to conducting research, he takes part in events to educate the public about the work being done at Friedrich Schiller University and the Planck Institute.

“There’s a big focus on teaching people about science that is being done here, which I’m really excited to be a part of,” he said.