Amy Aronson, PhD, is an associate professor of communication and media studies and director of the New Media and Digital Design program. Her research focuses on the evolution of women’s magazines from the late 18th century through today, and she is at work on a book for University of Illinois Press, Crystal Eastman: A Documentary Biography. Aronson’s project focuses on one of the lesser-known suffragettes, Crystal Eastman, whose life and work has been noted, says Aronson, but “not really heard.” This year marks the centennial of the founding of the Woman’s Peace Party–today, the Women’s International League for Peace and Freedom–a national organization whose rise was spearheaded by Eastman here in New York. 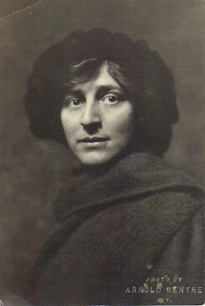 Q: Who is Crystal Eastman?
A: She is one of the most conspicuous reformers in America—an original co-author of the Equal Rights Amendment and a co-founder of antiwar groups like the Women’s Peace Party, which became the Women’s International League for Peace and Freedom. She co-organized the National Civil Liberties Bureau, which eventually became the American Civil Liberties Union. She and her brother Max Eastman also co-founded the socialist magazine, The Liberator. And yet, even though she left several institutional legacies, she’s relatively obscure today.

Q. Why do you think her story was lost in popular memory?
Eastman has been largely lost to us because of what we now call her “intersectionality.” She believed you can’t fix one social problem without fixing the others.  She targeted exploitation in the class system, sexism, militarism, and war as linked and mutually reinforcing social maladies.  What’s more, she wanted to be a mother even more than to have a career. She was one of a very few prominent movement women who tried to balance work and family at this time.

Yet her life and her work generally asked her choose: one single-issue campaign, one vision of a better world, and one identity—either activist or mother.  It was her effort to marry multiple identities that I think led to her marginalization in organizations she’d helped to found and movements she’d helped to lead.

Q: Describe her worldview.
A: Eastman lived through World War I and believed a world federation could be achieved—a “United States of the world”—that would transcend national boundaries and international rivalries, ensuring democracy, equality, and human rights to everyone, as well a bringing an end to poverty and war. There were a lot of organizations in the early 20th century that had utopian strains. At the time it wasn’t unusual to think that nations could work together.

However, when the progressives weren’t able to lead the other nations toward a negotiated peace before World War I, Eastman became disillusioned. The Russian Revolution led her to new hopes for world democracy as well as an almost immediate peace treaty between Russia and Germany. She became increasingly radicalized. Following her original vision—democracy, equality, world peace—after 1917 she moved further to the Left. She was one of only a few anti-war activists who continued to protest the world war after U.S. intervention. She supported conscientious objectors in their resistance to the draft, and continued to speak and write and organize against U.S. policy and participation. It was government suppression of these efforts that led to the founding of the ACLU.

Q. Did she embrace communism and revolution?
A. Like many on the Left, Eastman supported the Russian Revolution, and she did so with characteristic enthusiasm. The newsletter of Eastman’s Woman’s Peace Party probably articulated her point of view when it greeted the revolution “with mad, glad joy.” But Eastman never abandoned her intersectional perspective and multi-issue allegiances. In a two-part series she wrote for the Liberator from inside Communist Hungary, she celebrates the abolition of private property while she also bemoans the hypocrisy and human cost of revolution. Despite her support for Revolutionary transformation, she struggled with what she termed the dilemma of the “pacifist revolutionary,” – that is, she viewed Revolutionary action as a Leftist as well as a pacifist and feminist. And she admitted she had no real answer for how to bring these positions into alignment.

Q. What was The Liberator magazine like?
A. Crystal and Max founded The Liberator in 1918 as a successor to The Masses, a socialist magazine that was suppressed by the federal government. As The Masses editor, Max and several other editors were tried twice for treason. Although they were never convicted, both trials resulted in hung juries. By the time the cases were resolved, the magazine was finished. Similarly, The Liberator was meant to track revolutions around the world, but it was also a literary and artistic magazine that published the radical artists and thinkers of the day—John Reed, e.e. cummings, Dorothy Day.

Q. What would she think of today’s progressive movements in New York City and beyond?
Eastman’s ideas remain so relevant that she speaks to readers across a century. She would see all the progress we have made—progress for the working class, for women, for gay rights, and for racial equality. But at the same time there is still rancid racism and homophobia. Some of the basics like wage equality for women are still an issue. We have made enormous strides that make me as hopeful as Crystal, but I think she’d agree we still have a ways to go.