skip to main content
Return to Fordham University
You are at:Home»Politics and Society»Webinar to Explore Discrimination and Other Harms Against Unseen Tech Laborers and Health Care Workers

Ridesharing apps, home assistants like Alexa, and social networks are marvels of the modern economy. Seemingly powered by ingenious networks of artificial intelligence, they were unleashed by some of the most creative minds to come out of Silicon Valley.

In reality, though, many of the innovations of the digital economy have been propped up by an underpaid, underappreciated, and an unacknowledged class of people who Mary L. Gray and Siddharth Suri describe as “ghost workers” in their book Ghost Work: How to Stop Silicon Valley from Building a New Global Underclass (Houghton Mifflin Harcourt, 2019).

On Thursday, July 9, at 12:30 p.m., Fordham’s McGannon Center will host a webinar with the authors to discuss these largely unknown members of the global workforce.

The event, which is free and open to the public, will feature Gray and Suri explaining how they used extensive interviews and data analytics to show that this often unsupported workforce is essential to such things as geolocation, online payment systems, and content moderation, as well as fixing glitches and gaps in everyday systems we all rely on. 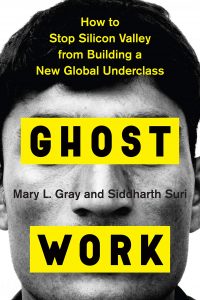 Olivier Sylvain, the director of the McGannon Center and a professor at Fordham’s School of Law, said their findings are especially relevant to contemporary concerns such as Facebook employees’ pushback against the company’s laissez-faire approach to misinformation and work stoppage efforts at Amazon in light of concerns about COVID-19.

“It isn’t just about the people who power Amazon Mechanical Turk, or the gig workers who drive Uber cars. It’s also about laborers in Southeast Asia who are finding the parts that go into the Amazon Echo, and it’s about the content moderators in India who are reviewing traumatic images of child abuse so that we never have to see them when we open our News Feed,” he said.

Sylvain said he’s most interested in hearing Gray and Suri talk about the ways that companies keep these workers’ stories out of the public eye, not so much by denying their existence as by touting the miracles of artificial intelligence.

“When Mark Zuckerberg testified in front of Congress in 2018, and people were worried about the manipulations of elections, his answer was, ‘We’re going to have AI solve this and make sure we don’t have disinformation on Facebook.’” 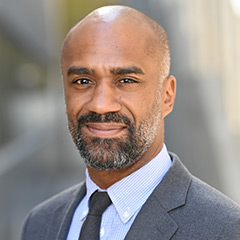 “That is laudable, and I hope that it works, but it is incomplete. The managers that run these companies and the labor they hire are just as important, if not more important, in deciding how the systems work. I don’t think they’re trying to block the information; I think there’s just a mismatch in the words they ascribe to the technology and services, and what’s actually going on.”

After Sarah Roberts, Ph.D., an assistant professor of information studies at UCLA, and Lilly Irani, Ph.D., an associate professor of communication, science studies, computer science, and critical gender studies at the University of California San Diego, share their reactions to the book’s findings, the day’s session will shift to the work that Kimani Paul-Emile and Sam Roberts, Ph.D., associate professor of history and of sociomedical sciences at Columbia University, have done in the health care industry.

Paul-Emile, a professor of law and associate director of Fordham Law School’s Center on Race, Law, and Justice, has spent years studying how race and inequality affect health care workers, a group whose challenges have only been heightened since the onset of the COVID-19 pandemic. 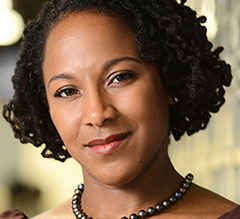 Nurses and nursing assistants often provide behind the scenes care to patients, but don’t always enjoy the types of workplace protections as other workers, said Paul-Emile.

“It’s been an open secret in medicine that some patients reject their healthcare provider based on race, religion, or ethnicity, said Paul-Emile. “While this biased patient conduct is disproportionately directed toward Black providers, in the age of Covid, there have been increasing numbers of patients saying, ‘I don’t want that Asian nurse,’ due to bias and unfounded fears of contracting the coronavirus.”

Paul-Emile explained that patients have the right to refuse treatment.

“But the health care worker also has employment rights that need to be respected. Title VII of the Civil Rights Act protects employees from discrimination on the basis of race, sex, ethnicity, or religion. So when these instances occur, it can be really difficult to discern what to do,” she said.

There’s also the fact that COVID-19 has sickened people of color and the poor at higher rates than other demographics.

“Initially there was discussion about whether there was something biological or genetic that predisposed these groups to be particularly vulnerable to the virus, but it quickly became clear that the disparities stemmed from how our society is structured. Many people in these communities are the first responders who are put in positions where they’re more likely to be infected by the coronavirus,” Paul-Emile said.

“That’s opened the door to very important conversations about structural inequality and race.”