skip to main content
Return to Fordham University
You are at:Home»Inside Fordham»Waving the Fordham Banner in Zimbabwe

Patrick Ryan, S.J. (GSAS ’65), the Laurence J. McGinley Professor of Religion and Society at Fordham since 2009, recently traveled to southern Africa for a few weeks with a Fulbright Specialist award to give a series of sixteen lectures (eight each week) entitled “Responding to the Call of Bilal: The Origins of Islam and its Development in Africa.” The host institution was Arrupe College in Harare, the capital of Zimbabwe, a Jesuit institution associated with the University of Zimbabwe over the past twenty years. 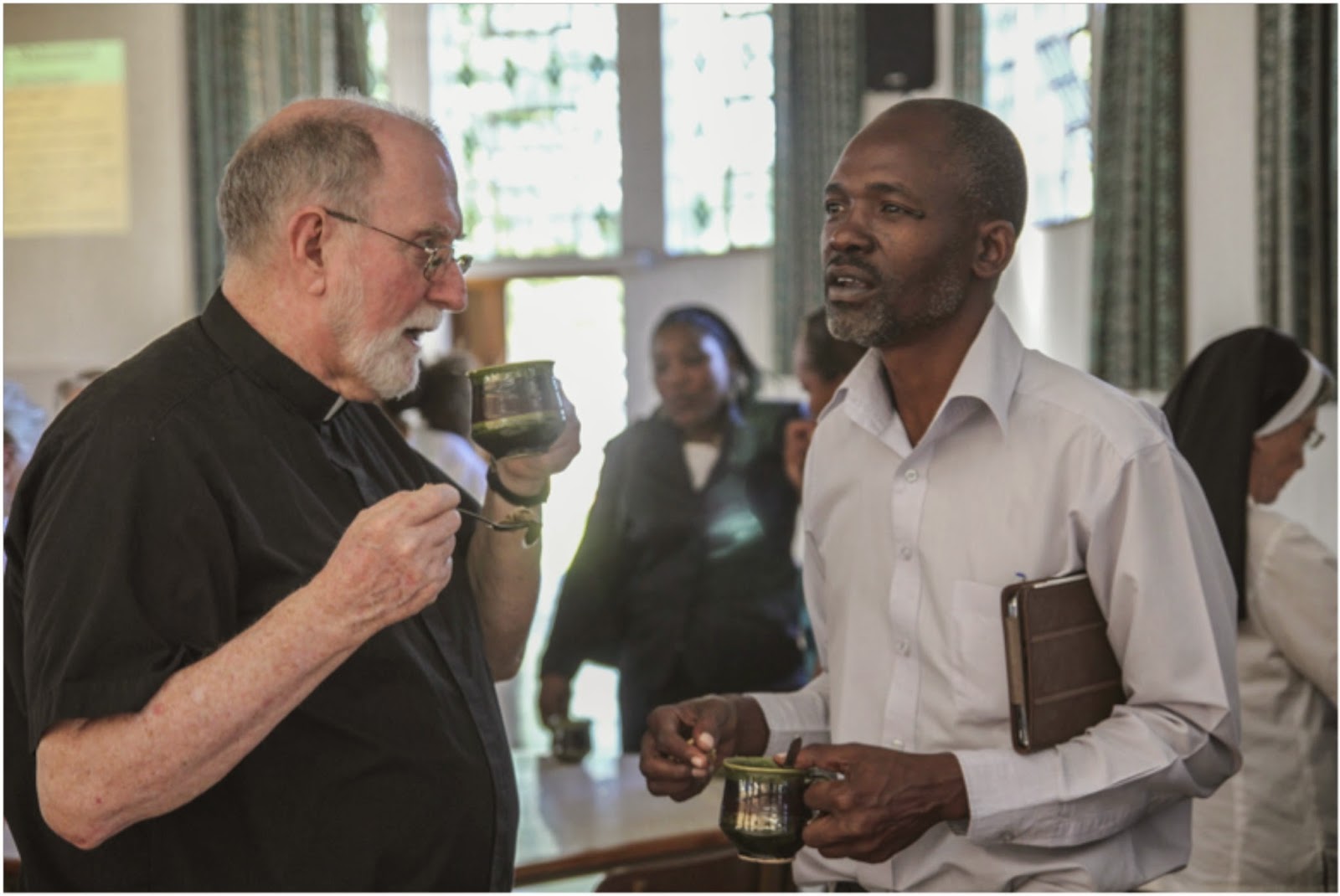 One of those attending Father Ryan’s lectures was a Zimbabwean Muslim, pictured at a tea break with Father Ryan. This man had previously studied with former students of Father Ryan’s in Ghana.

Father Ryan has previously lived in West Africa (principally Ghana and Nigeria) for twenty-six years. This was not, however, his first visit to Zimbabwe or the region of southern Africa. In February 2007 Father Ryan and Ilhan Akbil, associate dean at the Graduate School of Business Administration, first explored the possibility of what is now Fordham’s ongoing linkage with the University of Pretoria in South Africa. Dominick Salvatore, Ph.D., Distinguished Professor of Economics, first raised the Fordham flag in South Africa a couple of years earlier, when he lectured for the staff of South Africa’s Central Bank.
Twenty Fordham students are currently spending their spring semester as students at the University of Pretoria, and students both from the University of Pretoria and Fordham have studied on their respective campuses each of the last few summers, primarily in the International Political and Economic Development program. 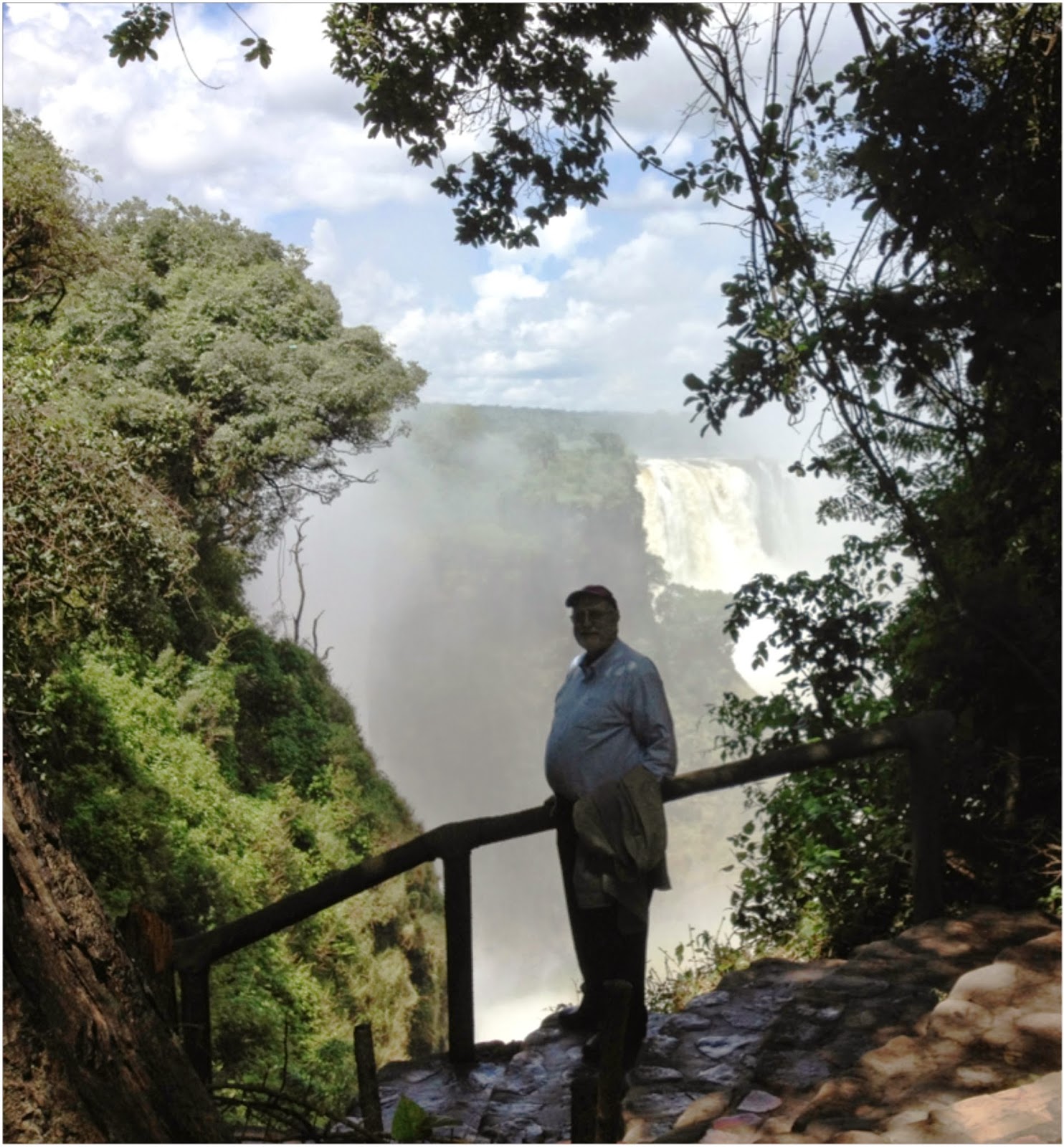 Father Ryan in shade, but wearing a Fordham baseball cap, with one small part of Victoria Falls in the background.

While in Zimbabwe, Father Ryan also gave a guest lecture (a preview of his April McGinley lecture) at Bishop Gaul Anglican Seminary in Harare. He also met with staff of the University of Zimbabwe and the Public Affairs Section of the United States Embassy in Harare. One night in Harare he also explored the Emergency Room of the Baines Avenue Clinic when something he ate earlier that day (he suspects a rotten egg) caused him an allergic reaction, causing his tongue to swell up, obstructing his breathing. The staff at the emergency room, as well as the Fordham graduate who is the rector of Arrupe College, Chukwuyenum Afiawari, S.J. (FCRH ‘94, GSAS ‘95), handled this minor emergency with aplomb. Father Ryan has visited hospitals in Africa more than he cares to remember over the years, and was very favorably impressed by this medical facility in Harare.
Not generally an avid tourist, Father Ryan did spend an overnight at Victoria Falls in the company of two other Fordham alumni, Gerald Aman, S.J. (FCRH ‘69), the administrator of Arrupe College, and Philip Rossi, S.J., the latter a visiting professor at Arrupe from Marquette University. Father Ryan’s judgment on Victoria Falls: “Move over Buffalo! Mosi-oa-tunya (the indigenous name for the Falls, ‘the Smoke that Thunders’) makes Niagara Falls look paltry.”  While wearing his Fordham baseball cap at the Falls Father Ryan was greeted by a passing American woman tourist who introduced herself as the grandaunt of Fordham Football Quarterback Mike Nebrich.