Stacey Barnaby, a Fordham College at Rose Hill senior majoring in chemistry, participated in “Hill Day,” in Washington, D.C., on Tuesday, September 20, 2010, in which young scientists engage policymakers on current research challenges and communicate the importance of supporting scientific discovery.

“It is scientists who spend many hours in the laboratory and come up with leading breakthroughs toward the cure for a disease, or vaccines, or build new materials for solar cells, or biofuels, to perhaps one day make us independent of foreign oil,” said Barnaby, who met with the staff of U.S. Sen. Charles E. Schumer, D-New York, among others. “The nation is at a turning point in its history and that it is natural for scientists to play leading roles in helping to determine what’s to come.” 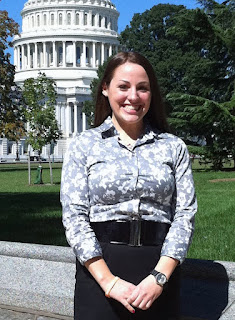 The event, sponsored by the American Society for Biochemistry and Molecular Biology (ASBMB), featured undergraduate and graduate researchers from universities across the nation, including Fordham, Brown and Yale Universities, and New York Medical College. The ASBMB is a nonprofit scientific and educational organization with more than 12,000 members worldwide.

“This is one of our most important activities,” said Thomas Baldwin, dean of the College of Natural and Agricultural Sciences at the University of California, Riverside, and a member of ASBMB’s public affairs panel. “Not only does it afford us an opportunity to talk with our elected representatives in Congress, which itself is a critically important activity, but it is an opportunity for young scientists to engage in the process of public debate. These are our scientific leaders of the future. Getting them involved now will pay dividends to the science community for years to come.”