skip to main content
Return to Fordham University
You are at:Home»Politics and Society»Undocumented and in College: University Press Shines Light on a National Topic 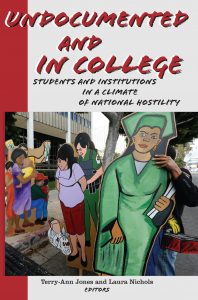 In the Catholic faith, Jesus is seen as one of the first immigrants, and is present in the faces of contemporary immigrants.

Undocumented and in College: Students and Institutions in a Climate of National Hostility, a new book published by Fordham University Press, documents the experiences of undocumented students as they navigate the processes of entering and then thriving in Jesuit colleges.

Press editor Fred Nachbaur said the book—an unsolicited arrival in 2015—interested him because of its clear focus on a population that hadn’t received much attention. That has changed dramatically in the last two years, and in fact, he noted that a year ago they changed the sub-head of the book to reflect the changing political climate.

“This is probably more timely than we even anticipated when we signed them for the book,” he said.

Although many messages coming out of the Washington D.C. are hostile to immigration, Nachbaur said Undocumented and in College is an example of how Jesuit institutions resist these sentiments. The Association of Jesuit Colleges and Universities (AJCU) reaffirmed its support for DACA this week, and Joseph M. McShane, S.J., president of Fordham, issued his own statement on August 31 to similar effect.

Besides interviewing the students, Jones and Nichols surveyed the knowledge and attitudes among staff and faculty at Jesuit institutions about undocumented students in their midst, and the institutional response to their presence. Separate chapters explore the historical and present-day contexts of immigration, including the role of religious institutions.

One of the authors’ conclusions is that for undocumented students, the migration process is not necessarily the cause of the greatest stress. Rather, a major cause is the fear of the seemingly random differences by municipalities in the application of ad hoc deportation orders, the ambiguities in federal policy initiatives on which their futures rely, and a climate of ignorance on campus of immigration issues.

“The message is, ‘We need to do it.’ You can’t turn your back on undocumented students,” Nachbaur said.