skip to main content
Return to Fordham University
You are at:Home»Campus Locations»Uncovering Italian-American History in the Bronx
Kathleen LaPenta, director of the Bronx Italian American History Initiative (BIAHI), discusses how the BIAHI is preserving the stories of Italian-Americans in the Bronx through oral history.
A new community outreach initiative at Fordham’s Rose Hill campus is chronicling the untold stories of Italian Americans living in the Bronx.

According to Kathleen LaPenta, Ph.D., director of the new initiative and an lecturer in the Department of Modern Languages and Literatures, the BIAHI seeks to honor the cultural diversity of the Bronx— which was also home to a significant number of Irish, Latinos, Jews, and blacks during the mid-20th century.

“While [it will] very much celebrate the rich Italian-American heritage in the Bronx, it is also about putting that heritage in contact with the heritage of others who were living in the Bronx at the same time, as well as calling to mind the notion that we are all in some way very transitory,” she said.

Gabelli School senior Bentley Brown, a research assistant on the BAAHP and BIAHI teams, said the new initiative is a microcosm of immigrant contributions to American society. 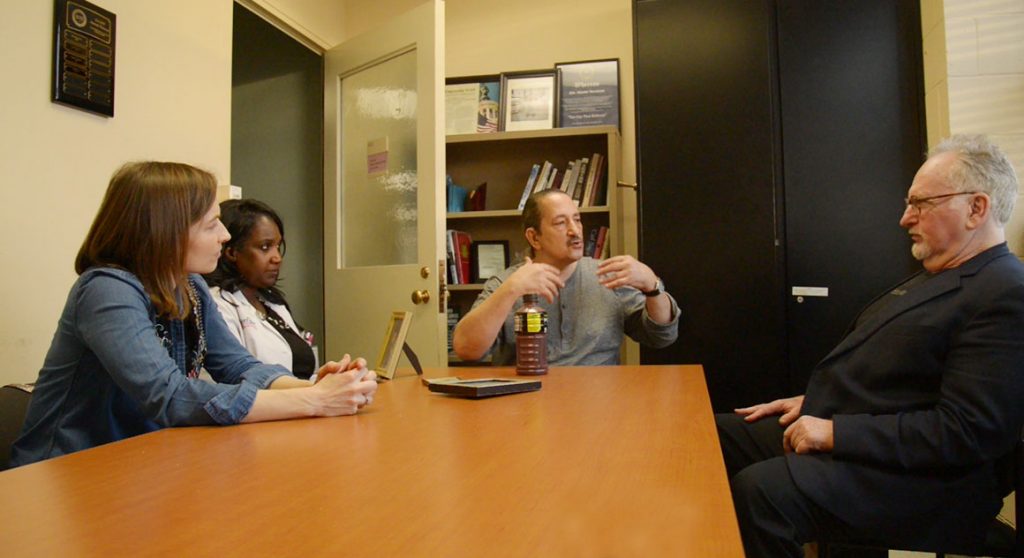 BIAHI directors Kathleen LaPenta and Mark Naison interview Bronx resident Fred Ponterotto about his experiences growing up in the Williamsbridge section of the Bronx during the 1950s and 1960s.

In January, the initiative’s staff interviewed a first subject, Fordham’s own Joseph Cammarosano, Ph.D., FCRH ’47, GSAS ’56, professor emeritus of economics and the University’s first president of the Fordham Faculty Senate. Cammarosano, 93, whose parents emigrated from Sorrento, Italy, has been a part of the Fordham community for more than 70 years. He spoke about growing up in an Italian and Jewish neighborhood north of the Bronx in Mount Vernon, and shared his recollections of Fordham’s involvement in the local community from the time he enrolled at the University in 1941.

“[The interview] gave us a starting point in terms of where to dive deeper and who to talk to next,” said Brown.

Most recently, the team interviewed Riverdale resident Fred Ponterotto, who spoke about his experiences growing up in the Williamsbridge section of the Bronx during the 1950s. Among the topics that Ponterotto discussed with LaPenta and BIAHI co-director Mark Naison, Ph.D., professor of African and African-American studies and principal investigator of the BAAHP, was his upbringing, racial tensions in the community, and the political climate at the time.

“I like to tell stories of those times,” said Ponterotto. “I revel in it.”

LaPenta said the BIAHI has become imperative, especially since Italian-American neighborhoods that were first established in the 1920s have been declining over the years.

According to figures from the U.S. Census Bureau’s 2006-2010 American Community Survey, there are approximately 57,527 Italian Americans living in Bronx County. In 2000, there were about 69,289 Italian Americans in the borough, bureau records show.

“We’re open to whoever wants to be interviewed and has an experience to share,” said LaPenta. “But the urgency of the project is for those people who are elderly, who might not have their stories to offer [because]they are getting up there in age.”

One of the goals of the BIAHI is to bring to light lost narratives from Italian-American immigrants, some of whom were marginalized, when they emigrated to Bronx neighborhoods such as Pelham Bay, Morris Park, Williamsbridge, City Island, Castle Hill, Melrose, and Belmont (“Little Italy”) decades ago.

“What we want to do is try to recapture what was there 50 years ago,” said Naison.

Race relations in the Bronx

Since the Bronx is often regarded as a cultural melting pot, LaPenta, Naison, and their student researchers have been exploring the BAAHP’s vast digital archive to gain a deeper understanding of how Italian Americans in the Bronx might have gotten along with other ethnicities in their communities during that time.

“People from different backgrounds and cultures were converging in a really concentrated way onto one geographic area of New York City and living on top of each other,” said LaPenta. “There was a unique intermixing of languages and cultures that took place [in the Bronx]that did not take place in other areas of the country.”

When the BAAHP first began, Naison and his team interviewed a small number of Latino, Italian, and Jewish residents who lived in the same communities and housing projects as African Americans. These interviews not only provided a more comprehensive look at what life might have been like for blacks in these culturally diverse neighborhoods, but also helped to jumpstart the BIAHI.

Naison and LaPenta said collectively the projects have provided new perspectives on racial tensions in various neighborhoods in the borough.

“There were these informal boundaries even at the public beaches and if you went into the wrong area, you could get into a fight,” said Naison.

While there were moments in which the Bronx’s dominant black, Irish, Latino, and Italian populations diverged, there were points when they came together too, particularly when it came to music, he said.

“The unparalleled musical creativity of the Bronx is in large part because of the mixing of cultures that took place in Bronx neighborhoods and Bronx schools,” said Naison. “This was true in the era of doo wop, mambo, and jazz. It was true during the rise of salsa and it was also true during the formative years of hip hop.”

Through the testimonies of Italian Americans and other ethnic groups that have helped to transform the Bronx, the BIAHI is capturing a part of the borough’s history that is often overlooked.

“Some of the experiences that we’re trying to uncover has to do with the ways in which the change in the neighborhood affected the individual with whom we’re speaking,” said LaPenta. “While the history [or]the public sphere note this market change in the demographic of the region, the individual processes that very differently.”