skip to main content
Return to Fordham University
You are at:Home»Politics and Society»U.S. Congressman and Former Jesuit Speaks at Fordham
Fordham professor Michael Peppard, U.S. Congressman Juan Vargas, Fordham student Thomas Reuter, and Fordham professor Thomas Massaro, S.J.
U.S. Congressman Juan Vargas, a California state representative and 1987 Fordham alumnus, met current students on April 1 over Zoom, where he answered their questions about religion and politics and reflected on how his time with the Fordham Jesuits shaped his perspective on life.

The event, “Faithful Service: Reflections on Religion in Public Life,” was hosted by the Curran Center for American Catholic Studies in conjunction with Fordham professor Michael Peppard’s Religion and American Politics course, whose students were in attendance, along with other guests. In the hour-long session, Vargas reflected on his eclectic life, the ways his faith shaped his political career, and the role of religion at the U.S. Capitol. 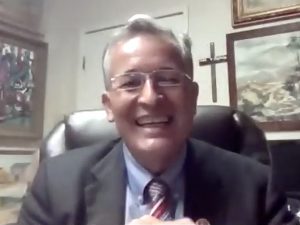 Vargas was raised on a chicken ranch in California with his nine siblings. As a young adult, he entered the Jesuits and worked with disadvantaged communities, including orphaned children and displaced people in El Salvador. He spent two years with the Jesuits at Fordham—where he earned a master’s degree in humanities in 1987—and said they instilled in his worldview the importance of making the world a better place.

“I have always been someone with deep faith in Christ. But this gave me a way of looking at the world and trying to address it in a way that makes sense to me,” Vargas said.

Vargas went on to graduate from Harvard Law School in 1991, along with his famous classmate, President Barack Obama. He left the Jesuits and married Adrienne D’Ascoli, a fellow Fordham graduate. He began his career in politics at the San Diego City Council in 1993, where he worked in planning, funding, and advocating for public safety, municipal infrastructure, and schools. He’s now a member of the U.S. House of Representatives in the 51st district of San Diego, where he has served since 2013.

Though Vargas is no longer a Jesuit, he remains a devout Catholic. A person’s religion can deeply inform their values, including his own passion for immigration reform in the U.S. His faith has also led to interesting interactions among his colleagues. When he joined a state assembly prayer group, he was the sole liberal Catholic in a group of right-wing Protestants. They disagreed on many issues, but they became friends, he said.

Peppard, a theology professor at Fordham, pointed out that the U.S. has seen a dramatic rise of people without religious affiliation. Vargas agreed and noted that many of his colleagues avoid mixing religion with politics because they are afraid of damaging their relationship with non-affiliated voters. He also recalled an evening dinner with the Dalai Lama, the spiritual leader of Tibet, where another guest asked the Dalai Lama about his perspective on religion.

“He says, ‘Well, I think people should be atheist. … There’s just too many wars, too many fights started over religion; it’d be better if people were atheist’ … [Among the non-affiliated, there is] that notion that religion does start a lot of problems, that religion creates the problem, not solutions. I understand that. There’s something to that.”

Thomas Reuter, a political science and theology double major at Fordham College at Rose Hill, asked Vargas, “How do you remedy any contradictions between your legal and political opinions and the institutional stances of the Catholic Church?” In response, Vargas said he tries to strike a balance by following the Constitution.

“I take an oath to defend the Constitution, and I really do try to do that. There are some instances, I think, where the Constitution doesn’t live up to what it should be … But those are the rules that we live under,” Vargas said.

Thomas Massaro, S.J., a professor of theology who knew Vargas when they were Jesuits together at Fordham, also asked Vargas—a longtime politician who has traveled across the country—to reflect on the differences in political culture between the West Coast and East Coast.

“Not a lot of things surprise me. I’ve been around in politics for a long time … Even though I’m a liberal Democrat, I’ve hung around a lot of Republicans who are pretty darn conservative, certainly in California. But when I got to the Congress, the one thing that I did not understand, didn’t really have a feel for, is how racist the South was and is,” Vargas said. He recalled a Southern party where he heard someone use the n-word. At first, he didn’t say anything. But when he heard the word a second time, he spoke up.

But his final anecdote wasn’t meant to be discouraging. Vargas said there are several other Rams in Congress, who are all proud of their heritage from Fordham—a place that prepared them for the real world.

“I hope the world turns out to be the greatest for you guys,” Vargas said to the students over Zoom. “It really is a wonderful place out there.”