skip to main content
Return to Fordham University
You are at:Home»Inside Fordham»U.N. Diplomat Outlines Road Ahead for Sudan in New Book 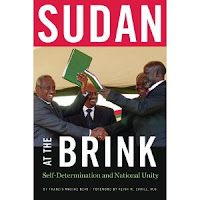 A first-hand look at one man’s lifelong efforts to advance peace and cooperation among the Sudanese is the subject of a new book published by the Fordham University Press.

Sudan at the Brink: Self-Determination and National Unity (Fordham University Press, 2010) was authored by Francis Mading Deng, United Nations under-secretary-general and special adviser on the prevention of genocide.

Deng, an expert on conflict management and U.S.-Africa relations, gave a lecture on constitutionalism in Africa at Fordham in April 2009.

He has served as Representative of the Secretary-General on Internally Displaced Persons, as Sudan’s Ambassador to the Nordic countries, Canada and the United States of America and as Minister of State for Foreign Affairs of Sudan.

More information on the new book can be found here.