skip to main content
Return to Fordham University
You are at:Home»Editor's Picks»Templeton-Funded “Varieties of Understanding” Conference Kicks Off at Fordham
Stephen R. Grimm, PhD, an associate professor of philosophy, opened the Varieties of Understanding Conference at the Lincoln Center campus.
The first of two conferences funded by the largest humanities grant Fordham has ever received began June 24, drawing psychologists, philosophers, and theologians from around the world to discuss the nature of human understanding.

The Varieties of Understanding Midpoint Conference is the first of two gatherings in a three-year interdisciplinary project that sponsors research into the various ways in which human beings understand the world.

Stephen R. Grimm, PhD, an associate professor of philosophy, received a $3.56 million grant from the John Templeton Foundation and supplemental funds totaling more than $640,000 to launch the project, which focuses on the fields of psychology, philosophy, and theology.

“Aristotle says in Metaphysics that we’re interested in not just how things stand in the world, but why they stand the way they do,” Grimm said at the conference’s opening, held at the Lincoln Center campus.

Understanding is something beyond knowledge, Grimm said. He offered the example of a Jeopardy! game: A person may be able to memorize many facts about the category American Civil War—for instance, when and where the war began, how many casualties resulted, and how slavery and states’ rights factored into the conflict.

However, if this person fails to see how these various data relate to each other as part of the whole phenomenon of the Civil War, then it seems he knows a lot about the Civil War without actually understanding it.

“The question is, what else is needed to transform Jeopardy! knowledge into understanding?” said Grimm, a philosopher who specializes in epistemology. “Understanding has been described as a feeling of some kind—a feeling of insight, like an ‘aha’ or a ‘eureka’… But what actually happens in the mind when we move from knowing a list of propositions about a topic to understanding it? What is that feeling an indication of?”

This question is especially relevant in the age of Big Data and the Internet, he said. Google has made acquiring information simple. Having greater access to data, however, does not necessarily mean that we understand more about the world.

Although we may be learning more, said Grimm, we may be “losing our ability to appreciate the deep connections about these various bits of information.”

“We know more, but we understand less.”

The grant was used to distribute approximately $2.6 million in subawards to fund new research on the psychology, philosophy, and theology of understanding. Twenty projects were selected from nearly 400 proposals to receive awards. 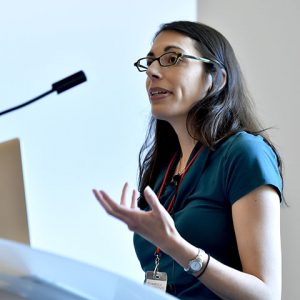 The eclectic group of international scholars—comprised of both world-renowned figures and up-and-coming young scholars—are presenting their initial findings over the course of the three-day midpoint conference.

Project topics include: a psychological study of why people are prone to believe an explanation that is complicated, whether or not it is correct; a cross-cultural inquiry into religious understanding; and a philosophical discussion of whether there can be different kinds or degrees of understanding.

In June of 2016, the award recipients will reconvene at the Lincoln Center campus and present their final research results at a capstone conference.

Tania Lombrozo, PhD, associate professor of psychology at the University of California, Berkeley; Michael Strevens, PhD, professor of philosophy at New York University; and Gordon Graham, PhD, the Henry Luce III Professor of Philosophy and the Arts at Princeton Theological Seminary directed the distribution of awards for psychology, philosophy, and theology, respectively.

As part of the project, Lombrozo has been directing empirical and theoretical research out of her Concepts and Cognition Lab at the University of California, Berkeley on the nature of human understanding. She offered some of her initial findings at the opening of the midpoint conference.

For a full description of the project, visit the Varieties of Understanding website.