State legislators, hopeful students, and representatives of area universities came together at Fordham on March 7 for the unveiling of a proposal to bring a college education within the reach of more students and their families. 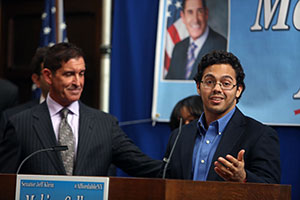 “Every child should have a fair shot” at going to college, said state Sen. Jeff Klein (D-Westchester/Bronx), State Senate co-leader and sponsor of a bill to expand college-saving opportunities. “That’s why I have made college affordability a major priority this year. This plan will help New York families save for their children’s education, while giving college graduates added incentives to put down roots here in New York after they graduate.”

He appeared at Tognino Hall on the Rose Hill campus with Joseph M. McShane, S.J., president of Fordham, and state assemblymen Jeffrey Dinowitz, Michael Benedetto, and Mark Gjonaj, all Democrats representing the Bronx. Also attending were students and representatives of Manhattan College, the College of Mount Saint Vincent, Mercy College, and the City University of New York.

“Education—Pre-K through 12, and through college—is the doorway through which one passes in order to achieve the American dream,” Father McShane said. “It is, for us in America, the great leveler, the great elevator, and the great unifier of our society.”

But affording college is increasingly difficult for families, especially families of immigrants, he said. “It is imperative that we all work together to make sure that we do not make it impossible for people to go to college and to achieve the American Dream for themselves and their families.”

⋅    allow parents to pre-pay tuition at state universities, and participating private and independent ones, so they can lock in current tuition rates;
⋅    double the allowable tax-free contributions to 529 college saving plans (to $10,000 for single filers and $20,000 for joint filers);
⋅    double the maximum tax deduction for college tuition costs, to $20,000; and
⋅    create a Study and Stay Tax Credit for those who remain in New York state after graduating from one of its colleges and universities. They would be able to deduct $5,000 a year from their tax liability for up to 10 years and use the money for a home purchase.

Several students related their families’ struggles to pay for college and the financial worries that weigh heavily on them and their peers.

“The affordability of college becomes one of the most pressing concerns in my life,” said Chynna Hernandez, a senior at Lehman High School in the Bronx. “The reality is that many students have the potential to succeed but the ability to succeed … is denied to them because they cannot afford higher schooling.”

“That is why I strongly believe that the affordability of college is something that needs to be a top priority,” she said.

“College education should not be an option for some; it should be an option for all,” Gjonaj said. “We can’t ask you to dream big, be successful, take this country and the state in the right direction, without giving you the tools necessary to do that.”