skip to main content
Return to Fordham University
You are at:Home»Politics and Society»Sperber Prize Ceremony Honors Foreign Correspondents
Elizabeth Becker
Photos by Marisol Diaz
Elizabeth Becker and Marvin Kalb, two esteemed correspondents whose reporting shed light on developments in Russia and Southeast Asia during the 1960s and 1970s, were honored on Nov. 7 at a ceremony at Fordham’s Lincoln Center campus.

Becker, who covered Cambodia for the Washington Post, was awarded the Sperber Prize for her biography You Don’t Belong Here: How Three Women Rewrote the Story of War (Public Affairs, 2022). Kalb was awarded a certificate of achievement for his distinguished career in journalism and two memoirs: Assignment Russia: Becoming a Foreign Correspondent in the Crucible of the Cold War, (Brookings, 2022) and The Year I Was Peter the Great, (Brookings, 2018).

The Sperber Prize, given annually for biographies and memoirs that focus on a professional in journalism, has been presented annually by Fordham’s Department of Communication and Media Studies since 1999.

Breaking Out of the ‘Pink Ghetto’

Becker said she wanted to highlight how her subjects—Frances Fitzgerald, Kate Webb, and Catherine Leroy—broke the thickest glass ceiling in journalism by covering the Vietnam War, and in doing so, paved the way for women such as herself. They hailed from three different countries and came from radically different backgrounds, but all three paid their own way to get to Vietnam, and with little formal training, broke out of the “pink ghetto” of fashion, food, and family coverage that women journalists were confined to at the time.

Their outsider status was key, she said, to their ability to look beyond the battlefield, where their male counterparts had been trained to focus their coverage.

“So, you had ultimately with these three women an approach to war that included the whole country, the society, the people,” she said. 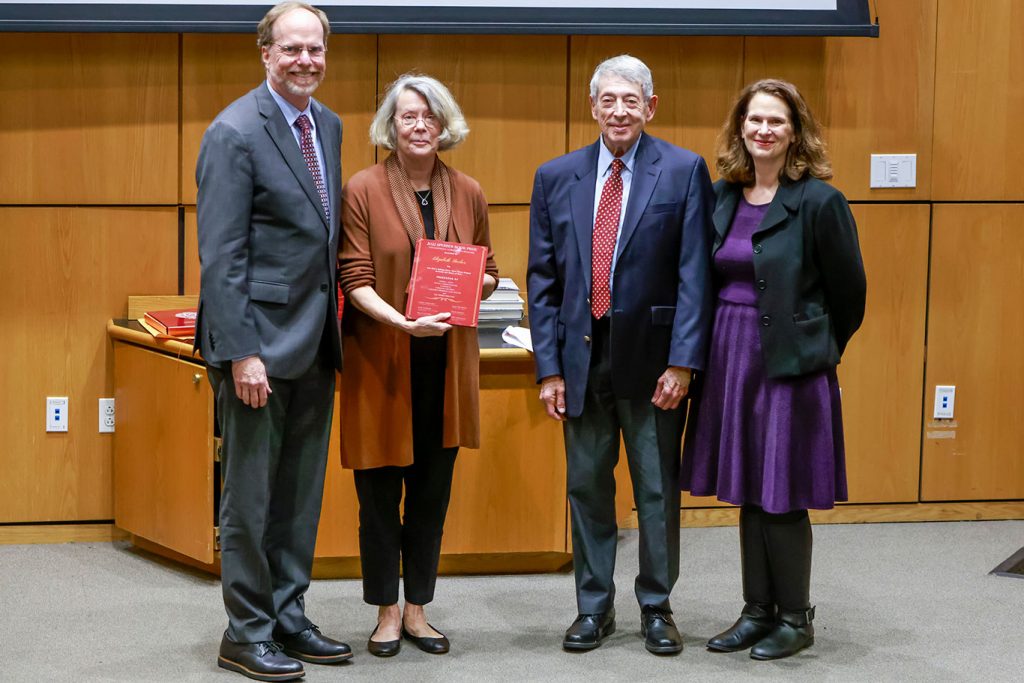 Although they found some semblance of success and recognition—Webb won the George Polk award and Fitzgerald won the Pulitzer—Webb and Leroy both suffered from PTSD, and all three had messy personal lives that Becker did not shy away from in her writing. She noted that none of the women expressed regrets about going to Vietnam.

“One of the big gifts for me in writing this book was that I felt it was really good for me as a woman to be a part of all that that,” she said.

“There was something that we could all be proud of, and I wanted to show that they not only broke the ceiling, but they changed journalism as well.”

Remembering Murrow and His Report on Buchenwald

Kalb, who appeared via Zoom, said he was touched to be honored with an award connected to famed journalist Edward R. Murrow. The Sperber Prize is given in honor of the late Ann M. Sperber, the author of the critically acclaimed biography Murrow: His Life and Times (Fordham University Press, 1999).

Kalb was the last person who Murrow hired at CBS News, and he said his favorite anecdote about Murrow was how in 1945, he visited the Buchenwald Concentration camp and saw for the first time what a death camp looked like.

“Murrow was overwhelmed, and when he went back to his hotel room and to sit down to write his piece, he couldn’t do it. I don’t know whether it was two days or three, but it took him a while before he could absorb what he had seen, and be able to present it adequately to the American people on radio,” he said. 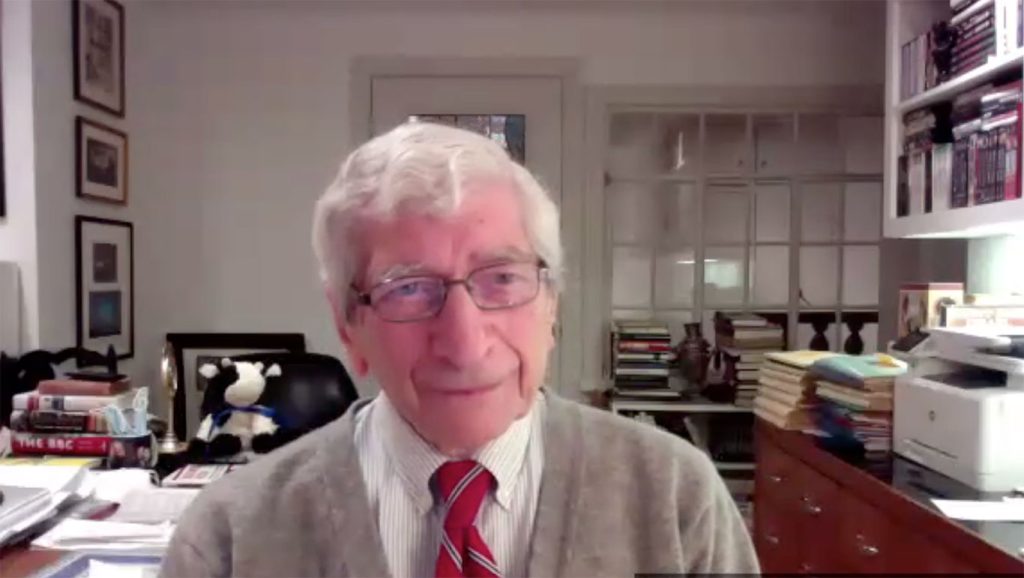 Marvin Kalb, who appeared via Zoom

An Appreciation for Khrushchev

Today’s broadcast journalists would not be given the same opportunity, he said, and he noted that in writing the third memoir of his time in Russia, which he’s doing now. the benefit of time has given him a better appreciation for Nikita Khrushchev, the First Secretary of the Communist Party of the Soviet Union from 1953 to 1964. Khrushchev is a major focus of all three of his memoirs.

It’s hard to believe that Khrushchev was so foolish to believe he could move missiles and 50,000 Soviet troops into Cuba without the United States noticing—thus triggering the Cuban Missile Crisis in 1962, he said. But Kalb, who covered the crisis as a new reporter, has come around to respect him now, particularly compared to current Russian president Vladimir Putin.

“He was the one Communist leader who recognized that he had made a profound mistake, and he publicly apologized and pulled the missiles out of Cuba and saved the world from a nuclear confrontation,” he said.

“I’m a year away from finishing this third memoir, and it is fun, it is exciting, and I thank all of the Sperber committee for thinking about me for this award.”