skip to main content
Return to Fordham University
You are at:Home»Colleges and Schools»Graduate School of Social Service»Social Work Students Lend Their Voices to Critical Causes

You can’t change the world overnight. But you can learn the tools that can bring change.

At a poster session on Dec. 16 at Fordham’s Westchester campus, students from
Fordham’s Graduate School of Social Service presented information and petitions for topics they hope to change—from the DREAM Act and legalized prostitution to geriatric prison reform and Native American rights.

Jonathan Wilson and three other classmates made their case for changing the narrative around guns, from one of control to one of safety.

“The problem is the rhetoric of gun control and Second Amendment rights that is always brought up when commonsense gun laws are brought to the table,” he said.

The group wore shirts with the phrase “Locked and Unloaded,” to call attention to Nicholas’s Law, which was passed in June by the New York State Assembly and is under consideration by the New York State Senate. It’s named for Nicholas Naumkin, a 12-year-old boy from the town of Wilton who was killed by a friend who used his father’s loaded handgun.

“There really was no penalty for the parent, so this is about making it stricter so the law gets enforced. You can have a gun in your home, but we want it locked and unloaded when it’s not in your possession,” said Wilson, whose own half-sister accidentally killed herself with her parents’ gun when he was 7. 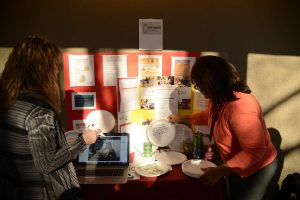 Karen Zokas, whose group focused on food insecurity, solicited donations for the Westchester Food Bank, and invited people to write on paper plates what it meant to them to be hungry. The issue, she said, is relevant to clinical social work that she plans to practice upon graduation, because if people are hungry it’s impossible to think about their own mental health. And it’s a lot more widespread than people might think.

“Twenty-thousand children under the age of 5 are passing away in this country because they don’t have enough nutrients. That’s a lot,” she said.

Even wealthy Westchester County is not immune. Fellow classmate Samantha Leushner noted that research has found that one out of five residents is hungry there.

“You have to focus on that word ‘hungry.’ Its not just food insecurity, but literally [that]you’re going to bed and your stomach is rumbling and you might feel nauseous,” she said.

A group focused on criminal justice reform named itself the Fordham Social Work Criminal Justice Network. The group has established partnerships with the Neighborhood Defender Service of Harlem and the Center for NuLeadership on Urban Solutions.

Member Gretta Heaney said she was shocked and ashamed at how ignorant she was about the subject before she came to Fordham. Books such as Michelle Alexander’s The New Jim Crow (The New Press, 2010) inspired her to take action.

“For many of us who care about social justice, there’s a lot we don’t know about. There’s a lot of ignorance about how the system works—the suffering, the discriminatory policies,” she said. 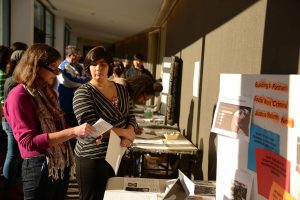 “I was just oblivious to it. So it’s a real raising of consciousness.”

All the students are enrolled in the class Social Policy II: Policy Practice and Human Rights Advocacy. Marciana Popescu, PhD, associate professor of social work, one of three faculty members teaching it, said the fair exemplified raising awareness and developing networks beyond the classroom.

“They get to experience what it means to be an advocate, and they also learn how to present their work shortly, concisely,” she said.

“You only have a few minutes when people stop by your table. How can you maximize your time to say ‘This is the issue,’ and ‘This is why you should sign.’ That’s part of their professional development.”