skip to main content
Return to Fordham University
You are at:Home»Colleges and Schools»Graduate School of Social Service»Scholar Urges Researchers to Reconsider the Question 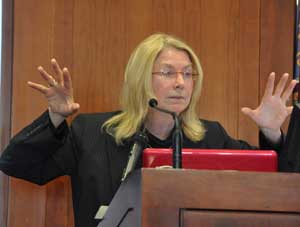 Before rushing to draw conclusions from data, researchers in the social sciences should re-examine the questions they ask to get results.

That was the message that Sharlene Hesse-Biber, Ph.D., professor of sociology and director of the Women’s Studies & Gender Studies Program at Boston College delivered April 21 at Fordham’s Lincoln Center Campus.

Hesse-Biber’s talk, “Where is the Social Justice in Social Research: Infusing a Social Justice Mission into Social Science Research,” was the keynote address of a forum sponsored by GSS faculty member Tina Maschi, Ph.D.’s Be the Evidence Project, with assistance by GSS doctoral student Samantha Sutfin. The focus was on human rights, social justice and qualitative methods.

The forum, which was the third in a series of similar events held this year, brought together scholars, researchers, community organizations and practitioners to discuss the ways in which qualitative research advances human rights and social justice.

Hesse-Biber aimed her sharpest barbs at randomized control trials, or RTC’s, saying we need to know why the questions
used in them are being asked, instead of just focusing on the data they generate.

“Traditional social science inquiry and research methods, especially those that employ a positivist paradigm, do not appear to tackle some of these research questions that are growing out of social justice movements,” she said.

“It doesn’t mean that [we]should throw out quantitative data. I would use mixed methods, qualitative data, quantitative data, GPS, image based research, you name it. But I know what the question is, and I understand the methods on the surface of this question that comes from a paradigm—a mental model that has at its roots a transformative social justice agenda.”

An example of how the system is not working, she said, is how researchers are prohibited from deviating from set questions when conducting surveys with members of the public.

“I’m going into the city of Detroit to figure out white attitudes toward people of color. This is serious business. They say ‘Sit down and have a cup of coffee,’ and I’m supposed to say ‘I’ll be more than happy to do that after the interview,’ and they’re looking at me as if I’m out of my mind,” she said.

“Is that person ever going to tell me anything if I don’t want to sit down and talk to them over a cup of coffee? In fact, they’ll say nothing except ‘yes, no or maybe’. I’ve lost the interview.”
Performance ethnography, a method pioneered by Norman Denzin, P.D., of the University of Illinois, is an alternative, she said.

“In order to get at traditionally invisible knowledge, he suggests that [we apply]research method tools that allow the researcher to tap into the trauma of oppression,” she said.
If research methods aren’t more closely examined for possible racial, gender or class biases, Hesse-Biber said academics run the risk of embracing what she called “methodolatry.”

“We hold up the method as the critical element in research inquiry, and my argument is . . .that unless we begin to do something else, what we’re really doing is scientism—over-reliance on a scientific discourse and a technocratic rationale as the basis for judging quality and evidence in our field,” she said.

Maschi, through her position as a 2010 Hartford Foundation scholar,  launched the Be The Evidence project at Fordham last year. It is a non-profit independent scholarly and creative venture designed to improve individual and community responses to today’s most critical social issues.