skip to main content
Return to Fordham University
You are at:Home»Inside Fordham»Faculty Reads»Saul Cornell Takes a New Look at Old Story of U.S. Founding
Photo by  B.A. Van Sise
Ask any American what kind of a government the United States has, and it’s likely they’ll say democracy, due in no small part to their ability to directly vote for leaders like the president.

Alexander Hamilton, James Madison, and other members of the country’s founding generation would be likely be dumbfounded by that answer, said Saul Cornell, Ph.D., Fordham’s Paul and Diane Guenther Chair in American History.

In The Partisan Republic: Democracy, Exclusion, and the Fall of the Founders’ Constitution, 1780s–1830s (Cambridge University Press, 2019), a new book he co-wrote with Gerald Leonard, Ph.D., of the Boston University School of Law, Cornell tells the story of how the Constitution was shaped; what it was supposed to do when it was ratified; and just as important, how it began to change almost immediately after it was ratified.

A Sharp Break With the Past

For starters, he said it’s worth remembering that in one generation in the late 1700s, aristocracy and monarchy, which were the two central institutions of European government for thousands of years, were tossed aside by the leaders of the American Revolution. 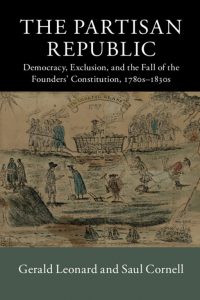 “So, what were the American revolutionaries going to do to replace it? We tend not to think about that because we’ve done it successfully for 200 years and we take it for granted. Today most countries in the West are parliamentary democracies, but our constitutional form is unique,” he said.

The original answer to this question, he said, was far from the “government for the people, by the people” majority rule that we envision the country to be now.

“We still mistakenly think we were always meant to be a democracy. We don’t realize what a struggle it was to take a government that was not designed to be a democracy and make it one,” he said.

Far from being open to a full-fledged democracy, the founders actually established a republic governed by an enlightened elite.

The book, which is geared toward everyone from casual readers to graduate students, sets the scene of the creation for the Constitution, which was ratified in 1788. At the time, he noted, constitutionalism pervaded American culture in a way that’s inconceivable now.

“People were saying in private letters that, ‘Everyone from the doorman at the tavern to the governor is talking about the constitution.’ While I’m sure there were some people who were too drunk to know what was going on, or just not paying attention, what’s remarkable is how many people were caught up in it and paying attention,” he said.

Government by the Few for the Many

Of course, that didn’t mean that everyone actually got a say in the conversation about the Constitutions.  Women, slaves, and native Americans were not directly part of the great debate.

“The general view of most legal scholars is that the people must have been quiescent or just inarticulate. But in fact, they were very much trying in whatever ways were available to them to have their voices heard. There were a lot of people doing the best they could to take the ideas of the American Revolution and make them their own,” he said.

The founders also created the Electoral College as another check against unrestrained democracy setting it up to be something akin to the College of Cardinals, the small group that chooses the Pope.

“You’re essentially creating a filtering mechanism so that the people will not directly elect a president who might not be sufficiently educated, informed, or wise enough,” he said.

He noted that the Electoral College was also meant to be a bulwark against the rise of political parties. Thomas Jefferson famously quipped, ‘If I could not go to heaven but with a party, I would not go there at all.’ It was a generation, Cornell said, that was very suspicious of democracy.

“The Founders wanted the people to be involved, but they feared turning over the reins of government to the people; they were deeply worried about that,” he said.

“They’ve looked at the history of Rome, and they know that republics fell because of rabble rousing and the mob: turbulence eventually led to tyranny. So they were trying to create a republic, not a democratic form of government, with checks and balances built in throughout.”

Things began to change pretty quickly, though, thanks to people like Andrew Jackson, a Democrat who was president from 1829-1837. A product of the west, Jackson embraced a more democratic vision for the country, but he did so by appealing to voters who would deny equal rights to women and minorities and who cheered on his vicious treatment of native Americans.

“It was not pre-ordained that America would exclude woman, blacks, Indians. The idea that there was no room for these nonwhite, non-European people in the growing American republic takes center stage with the rise of Jackson,” said Cornell.

The notion of using legal barriers to exclude everyone but white men from political power is obviously absurd today, but Cornell said we’d still be wise to consider the balancing act that the founding generation embraced when they crafted the Constitution. Although ideally democracy and liberty go hand in hand, for most of western history that has not been the case. Many of the populist leaders who have risen to power in recent years, for instance, have done so via democratic processes, but they do not necessarily value or promote liberty, certainly not liberty for all.

“We have this idea that democracy and liberty always support one another. Well, democracy doesn’t always lead to freedom. That’s an important lesson we need to learn,” he said.

If there’s one image that encapsulates Cornell’s thoughts about the American Constitution, he said, it’s the image of Odysseus tied to the mast of a ship in Homer’s The Odyssey. Odysseus understood that if he did not bind himself to the mast it would drive him mad, so, he had his crew plug their ears with wax, and instructed them to not untie him.

“Constitutional governments strive to tie the people to the mast so that they will stay alert but not be swayed by the siren songs of demagogues. The founders sought to build the right kind of mast to tie ourselves to, so we can get back to our safe harbor,” he said.

“If you tied yourself up so tight that you strangled yourself, you haven’t really done yourself much good. If you don’t tie yourself tightly enough to that mast, you’re going to just jump in the water, and you’re another victim of the siren’s song. The nature of constitutional government is to find the right balance between liberty and order:  popular government restrained by the rule of law.”