skip to main content
Return to Fordham University
You are at:Home»Inside Fordham»Richard Engel to Speak at 168th Commencement 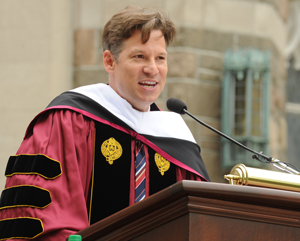 NBC News Chief Foreign Correspondent Richard Engel, an acclaimed chronicler of wars, revolutions and political transitions in the Middle East over the past 15 years, will deliver the keynote address to the Class of 2013 at Fordham University’s 168th Commencement on Saturday, May 18 at the Rose Hill campus.

Widely considered one of the nation’s top foreign correspondents, Engel has covered the entire war in Iraq, the war in Afghanistan, the 2006 Israel-Hezbollah conflict, the uprisings in Egypt and Libya, and the current conflict in Syria, where he and his production team were kidnapped for five days in December. His many honors include five News and Documentary Emmy Awards, the Edward R. Murrow Award, and the Medill Medal for Courage in Journalism, given for his broadcast report, “War Zone Diary.” He is the author of two books, A Fist in the Hornet’s Nest (Hyperion, 2004), and a follow-up, War Journal: My Five Years in Iraq (Simon & Schuster, 2011).

“Richard Engel is the model of what a commencement speaker should be,” said Joseph M. McShane, S.J., president of Fordham. “He is highly accomplished, engaged with the world’s great events, and well able to convey his experiences and insights to our students, their families, and our faculty. We very much look forward to his address on 18 May.”

Engel joined NBC News in 2003 and served as primary Iraq correspondent, senior Middle East correspondent, and Beirut bureau chief before becoming chief foreign correspondent in 2008. His reports have appeared on many of the network’s programs including Today, Meet the Press, Rock Center with Brian Williams, and NBC Nightly News. He has written articles for USA Today, Reuters, AFP, and Jane’s Defense Weekly.

Engel moved to the Middle East after graduating from Stanford University in 1996 with a bachelor’s degree in international relations. He became fluent in Arabic while living in Cairo, and easily shifts among several Arab dialects. From 2001 to 2003, he was Middle East correspondent for “The World,” a joint production of BBC World Service, Public Radio International and WGBH-Boston radio, and he also worked as a freelance journalist for ABC News during the U.S. invasion of Iraq in 2003.

Engel’s appearance will be a return visit to the University. In May 2012 he appeared at Fordham Law School’s Center on National Security for a dialogue with CNN national security analyst Peter Bergen about Bergen’s book on the successful hunt for Osama bin Laden.

Engel will be the second consecutive high-profile expert on the Middle East to deliver the University’s commencement address. Last year’s graduating seniors heard from John Brennan, FCRH ’77, President Obama’s deputy national security adviser for counterterrorism and homeland security at the time, who has since become director of the Central Intelligence Agency.