skip to main content
Return to Fordham University
You are at:Home»Inside Fordham»‘Race to Nowhere’ Screened at Fordham 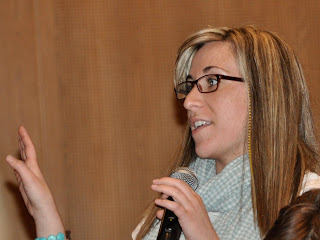 An attendee of the screening gives her thoughts on the film.
Photo by Gina Vergel

More than 130 people attended a screening of a documentary that condemns the pressure put on some students by schools and parents. Race to Nowhere: The Dark Side of America’s Achievement Culture (2009) was shown at Fordham’s Lincoln Center campus on April 27.

Fordham’s Graduate School of Education and the Student Affiliates in School Psychology (SASP) sponsored the screening of the documentary, which was produced by parent-turned-filmmaker Vicki Abeles.

Abeles said she made the film after she noticed her own three children were experiencing stress due to the pressure of a culture that has “invaded our schools and our children’s lives, creating unhealthy, disengaged, unprepared and stressed-out youth.”

“I saw the strain in my children as they navigated days filled with school, homework, tutoring and extracurricular activities. But it wasn’t until the crisis of my 12-year-old daughter being diagnosed with a stress induced illness that I was determined to do something,” Abeles said on the film’s website.

Race to Nowhere featured interviews with young people who attend public and private schools, educators who are worried that students aren’t developing the skills they need, and parents who are trying to do what’s best for their kids, even though some of them admit they are the ones who add to the pressure.

After the screening, Zsuszanna Kiraly, Ph.D., associate professor of school psychology and director of the Hagin School Consultation and Early Childhood Centers, moderated comments from the audience.

One woman who said she was a teacher in a New York City public school said she couldn’t help but think of her students, who many times are not involved in any extra-curricular activities.

“So for them and their parents, homework is that thing they do after school. It’s a responsibility and, sometimes, a source of success for some very underprivileged students who don’t have the opportunity to participate in any activities,” she said. “This [film]seemed very far off on the other side to me.”

Another teacher who said she worked in a school where some students do participate in extracurricular activities, wondered how one could go about getting schools and parents to buy into reducing homework, which the film advocated for.

“How do we get them to take those risks? Let’s say the students don’t perform well on the test, where everything is accounted for, then we may start losing money,” she said. “It’s really a tricky position. I think [the movie]is trying to get across a great message, but it may be too idealistic.”

Kiraly said she feared society at large might be sending a double message.

“In one way, to get to the best school, you must get the best grades and so it becomes very grade oriented,” Kiraly said. “And then in terms of psychological adjustment, we’re trying to come up with non-academic ways of success. But still, society tells us you are only successful it you get into a certain kind of school.”

In the film, middle school students expressed pressure to get into the best high schools while high schoolers stressed about getting into top colleges. The film even interviewed the mother of a 13-year-old who may have committed suicide over a bad math grade.

An audience member who said she was a public school teacher in the Bronx said students are being prepared for tests very early in the school year.

“Students are losing their ability to enjoy school because school has become test prep, starting early as October,” she said. “Students are judged on one test score. So you’ll have a child upset the score and if they don’t achieve a certain level, they are either sent to summer school or retained. I think students are suffering and losing their sense of what school really should be.”