skip to main content
Return to Fordham University
You are at:Home»Inside Fordham»Q&A with Haroon Moghul 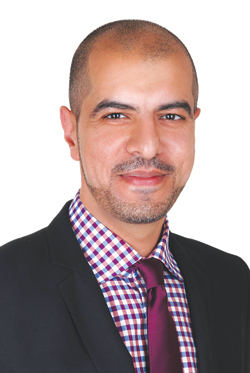 Haroon Moghul is a fellow at the Center on National Security at Fordham Law specializing in Muslim politics and societies, and a regular commentator in the media. You can follow him on Twitter @hsmoghul.

What is Muslim identity in America?
We often use the term “Muslim World” as a stand-in for the Middle East, but there are Muslims from Madagascar, to the Philippines, and Bosnia. I’m interested in where there is overlap. The similarities have implications for what it means to be Muslim in the West. In the Western world you can be an American and a Muslim; it’s very self-evident. But sometimes the way Muslim identity gets framed by the media tends to be oversimplified, and it becomes a chance for a cheap shot.

Within the Western context, what distinguishes the Muslim experience in North America from that of Western Europe?
In some sense Europeans are used to difference. They can be in a different country in an hour. But a lot of European Muslims don’t feel at home where they live and tend to identify with their homeland. In Anglophone countries of North America, Muslims tend to identify more with their communities. There is a civic nationalism here, almost a constitutional identity, that’s not necessarily nationalism.

So is it easier for Muslims in the states than in Europe?
There’s more political imagination here. Europe has become a claustrophobic and backwards place. In the United States there are a few cultural advantages too. Just look how many South Asians are in comedy. Diversity is sexy here. It’s cool. Then there’s validation with a president who has Muslim ancestry.

How are the Internet and Muslim youth culture breaking down borders?
Six years ago when students at NYU began putting the Imam’s sermons online as a way of connecting to the community when they were away from school, it went way beyond what anyone expected. It allowed young Muslims to sidestep their physical community, to hear something else. It helped good ideas to compete with more extremist voices.

Where does Fordham fit into the picture?
Fordham is in a very interesting place, first by virtue of being in New York City. With about 700,000 Muslims, New York is unlike anywhere in the states. College is a lab for Muslim identity. The Jesuit tradition is interesting because it raises the question of being part of a conservative tradition in a very liberal setting, and that resonates with Muslims. The challenge that Europeans have with Muslims is not necessarily that they’re ethnically different, but that they’re religious. It’s considered weird. But in America being religious is not uncommon. So being a practicing Muslim in a university where there are practicing Catholics, it’s not a big deal. If anything, the tradition here points to the future for Muslim Americans. It’s a model.