Pioneering researchers, students, and emerging scholars shared cutting-edge qualitative research methods that are boosting social justice, at a two-day conference organized by the Society for Qualitative Inquiry in Psychology (SQIP).

Held at Fordham’s Lincoln Center campus from May 24 to 25, the event highlighted innovative, non-statistical procedures—including case study, ethnography, and life history. It was sponsored by Fordham, the Bronx African American History Project (BAAHP), Fielding Graduate University, and the Graduate School of Religion and Religion and Religious Education, among others.

Kim Hopper, a professor of clinical sociomedical sciences in Columbia University’s Mailman School of Public Policy, delivered the keynote address. A medical anthropologist who has provided leadership in qualitative methods for almost four decades, Hopper was recognized for his extensive research on homelessness and severe mental illnesses.

The conference kicked off with an opening plenary about how the BAAHP has uncovered the diverse histories of marginalized communities in the Bronx. Mark Naison, Ph.D., professor of African and African-American studies and principal investigator of the BAAHP, led a panel that featured:

Purnell, a member of the BAAHP research team from 2004-2010, said the oral history project has helped to confront pre-existing assumptions about the Bronx that developed when poverty and arson fires swept through the borough during 1970s and 1980s. The project gave residents a platform to share their “side of history,” he said.

“The Bronx African American History Project’s presence at a psychology conference is . . . indicative of the interdisciplinary vibrancy that social science and humanities scholars can bring to socially engaged community-based research that, at its core, seeks to contribute to the public common good,” he said. 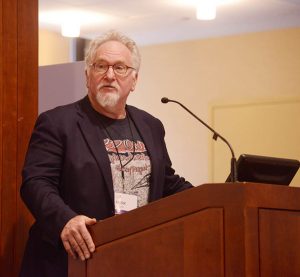 Mark Naison, Ph.D., professor of African and African-American studies, led an opening plenary at the 2017 SQIP Conference about the research methods of the Bronx African American History Project (BAAHP) on May 24, 2017.

Naison said the BAAHP is in some degree an anti-trauma initiative that is operating in the spheres of popular psychology.

“One of the biggest things that I confronted when I interacted with educators and community developers who dealt with youth and parents is the negative self-image and psychology they had as a result of living in the Bronx,” he said. “Community organizers felt that was a real inhibitor because [the youth]saw themselves as a product of failed communities.”

The symposium, “Building, Interpreting, and (Re)defining Community and Collectivity,” provided perspectives about how different communities on the periphery of society are challenging oppressive structures. Doctoral candidates of psychology from the City of New York (CUNY) shared how participatory approaches have helped to advance their research about LGBTQ, immigrant, and African-American communities.

The symposium’s chair Michelle Fine, Ph.D., a social psychologist and professor of psychology at CUNY, said their qualitative research methods are helping to fuel social movements for justice at a critical time in the nation’s history. 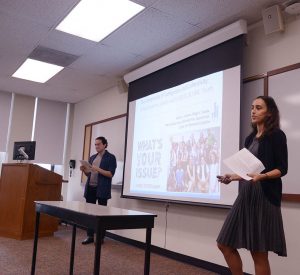 CUNY doctoral students Diego Rueda and Allison Cabana share findings from their participatory project focused on LGBTQ and Gender Non-Conforming (GNC) youth at the 2017 SQIP Conference on May 24, 2017 .

“[The research projects look] at the stories that people are telling about themselves, and challenging categories that psychology has used to narrowly constrict people,” she said.

One panel focused on the challenges facing qualitative researchers, such as ethical dilemmas that they face in their work.

“What we’ve tried to do is identify some of the issues that we face around how we represent the participants that we work with, how we do participatory research in a way that’s ethical, and how we interact with publications and professional associations that don’t always understand the kind of work that we’re doing,” said Anne Galletta, chair of SQIP’s ethics committee.

Fordham psychology professor Frederick J. Wertz, Ph.D., co-chair of the conference program, said the varied sessions in the conference further legitimates qualitative research approaches, which were once disparaged but are now viewed as valued scientific methods in psychology.

“This conference is a perfect wedding of the cherished values of our University and the forward edge of development in research methods that integrate science and humanism,” he said.