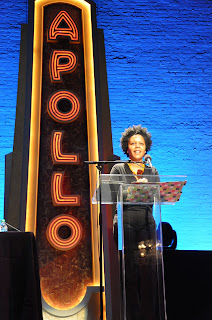 Helping gear up an audience of 1,500 for a debate-viewing evening at Harlem’s Apollo Theater, Greer surveyed the panelists, who ranged from conservatives (American Spectator columnist William Tucker) to activists (WBAI commentator Esther Armah and Amsterdam News’ Herb Boyd) and everything in between, with a set of questions, including:

What will Romney eagerly try to address? (Answers: Libya, unemployment under Obama, his human side)

What will Obama try to address? (Answers: Why he’s worthy of another term, his confidence, Romney’s inaccuracies)

But the thought-provoking pre-debate banter between panelists was just an appetizer for the main event: the rousing, sparring jangle between the President and his challenger, Mitt Romney, which was viewed on a large screen in the landmark theater.

Following one pre-debate question from a Green Party supporter on the pointlessness of voting, Greer summed up a political truism just before the on-screen debate began: if you don’t vote, you have no right to complain. 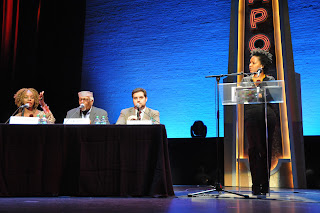 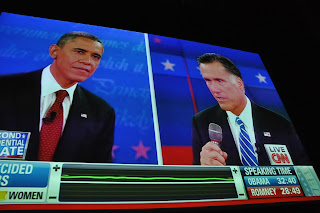