skip to main content
Return to Fordham University
You are at:Home»Politics and Society»Parallels Between Plagues Past and Present Highlighted in Partnership with Bronx Science
A slide from the presentation that Rachel Podd used in a class she taught to students of Bronx Science High School
In mid-March, Rachel Podd was teaching a course on early modern history to undergraduate students at Fordham’s Rose Hill campus. A little over a mile away, Matthew Clark at the Bronx High School of Science, was preparing to teach a section of his freshman global history class that focused on the Black Death, which is estimated to have killed as many as 200 million people in Europe in the 14th century. 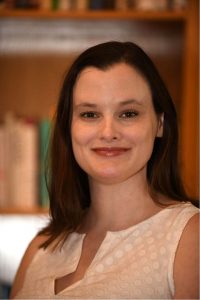 The onset of the COVID-19 pandemic upended instruction for both classes, but on May 6, the two were able to come together for a one-time collaboration that dramatically expanded the high school students’ understanding of the similarities between the Black Plague and the current pandemic.

Clark e-mailed Fordham’s Center for Medieval Studies in April, which connected him to Podd, a Ph.D. candidate in history who had since moved back home to Dallas and was teaching remotely at the time.

Podd, whose dissertation focuses on how medieval people understood disease and how it affected the practice of medicine, recorded a 20-minute lecture for the high school students to watch on their own. She also assigned them reading such as a selection from Giovanni Boccaccio’s Decameron recounting the author’s experience of plague in Florence, and several current news articles on COVID in New York that focused on areas of commonality, such a rise in xenophobia and a breakdown in the rituals of death and dying.

She’d also taught a class at Fordham in the fall titled Plagues and Peoples: The History of Disease in Medieval Europe and was able to repurpose material for a high school audience. On May 6, she, Clark, and 50 students logged on to Google Meet for a 90-minute Q&A session.

“The major thing I wanted to highlight was that even though the Black Death seems so remote and has nothing to say to us today, with our smartphones and internet, and everything that’s so advanced, in reality communities and societies almost always respond the same way to moments of intense stress,” she said, noting that attacks and wars elicit similar responses.

“The way that societies respond is they harden boundaries that can be geographic, as with quarantines, or social. So the boundaries between who is in and who is out, and who is acceptable and who is not also become harsher. That was true for the Black Death, and it’s true for communities experiencing COVID-19.”

There other parallels as well. Doctors wore masks during the 14th century just as they do today, except theirs had a distinct bird head-like appearance.

“The point was that the beak acted like a reservoir for spices or sponges filled with vinegar, and it was supposed to keep the doctor from having to smell the bodies sick with the plague, because it was thought that that smell was one of the ways that it was transferred,” she said.

“The mask allowed him to keep his hands free while treating people. So, it’s not all that different from today.”

Clark said the idea of inviting a scholar from a local university to address his class came about as he was trying to think of ways to make remote learning more interesting for his students.

“It really was a fortuitous coupling of her expertise with where I was in the curriculum at that time, because she brings a comprehensive knowledge of medicine in the Medieval world in England, and the Black Death,” he said.

“I thought it was awesome that she was able to draw together the past and the current predicament that we’re in.”

The question and answer session on May 6 was the best attended live meeting of the semester, he said.

“It was really valuable for the students to see what a studied person can bring to a dynamic context like a Q&A session, where anything can be thrown at the expert,” he said.

Another major lesson from the plague that Podd emphasized turned out to be especially relevant. Just 19 days after the meetup, George Floyd’s death at the hands of a Minneapolis police officer ignited worldwide protests against racism. Although the Black Death was immeasurably painful, she noted that it allowed for considerable social reform, including increased female entry into the workforce and rising social mobility.

“I am in no way trying to minimize the intense suffering,” she said, “but if we look for a silver lining, there really is one. And that is that these moments of extreme stress are an opportunities for a reevaluation of what our values are.”

The Black Lives Matter protests are so intense she noted, because of the justifiably intense feelings that the deaths of Breonna Taylor, Floyd, and others engendered. But it’s also worth noting that some protestors lost jobs due to the pandemic, and that gave them the opportunity to join protests they might have otherwise not attended.

“It’s kind of hard to see the good in this, but this gives us a chance to lobby for a more just, more equitable world,” she said.