An interdisciplinary panel met in the South Lounge of Lowenstein on April 19 to discuss new issues resulting from the changing demographic in urban New York.

Joseph Salvo, director of the Population Division at the New York City Department of City Planning, discussed the shift in the demographic makeup of each New York City borough in terms of age and race or ethnicity. He described New York as having an “ebb and flow” of people in which, through migration and immigration, the city replenishes itself.

Since the recession, though, more people are arriving to the city than leaving.

“Because, where are you gonna go? Florida? Arizona?” Salvo said.

According to Salvo, this influx of migrants consists of young, highly educated adults trying to establish careers.

In addition, each neighborhood’s racial and ethnic demographic has shifted. Harlem is losing its black residents to suburbanization.

“Where are the Asians? Not in Chinatown!” Salvo quipped, they are moving to Bensonhurst and Queens. Dominicans are moving out of Washington Heights, while Mexicans are moving in. Staten Island and Brooklyn are seeing increases in Puerto Rican residents.

Alyshia Glavez, Ph.D., associate professor of anthropology at Lehman College, City University of New York, discussed the deportation of more than 400,000 immigrants per year over the past three years. Many deportees are parents who become separated from their American children, she said. These children are then put into foster care and may be adopted.

The Dream Act is a “miserable piece of legislature,” according to Galvez, because it merely helps with the Tuition Assistance Program, rather than changing the status of undocumented students. The legislation would increase taxes by $1.39.

“I spent more than $1.39 at Starbucks on my way here,” Galvez said, illustrating how minor the tax increase would be.

Neil Smith, Ph.D., Distinguished Professor of Sociology at the Graduate Center, City University of New York, discussed the Occupy movement and gentrification, the restoration of decaying urban areas by more affluent people. He said that today our futures are radically open because the crises experienced over the last decade has given the right and left an opportunity to exert change.

According to Smith, Occupy shook ideas of capitalism and caught the elite off guard, as shown by the response of Bloomberg and the NYPD to the occupation of Zuccotti Park.

While some consider gated communities a thing of the past, Low said there are six in Queens and two in Brooklyn. In addition, co-op buildings, because they are secure and private, function as modern gated communities.

When asked about co-op buildings, most residents replied that they feel safer due to the presence of a doorman and financial vetting. Some said they think the application process is racist, because co-op boards ask questions such as “Do you cook ethnic foods that could be offensive?” The application process reinforces social and racial segregation. 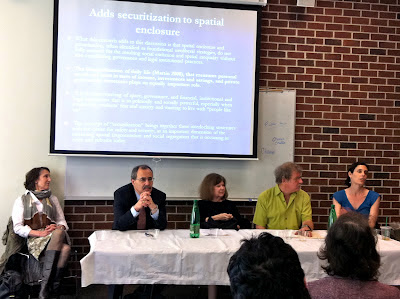 The Department of Sociology and Anthropology and the Urban Studies Program sponsored the event.